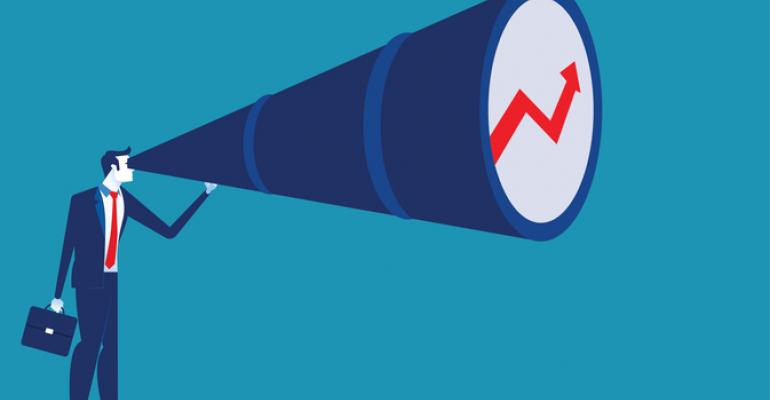 2018 estimates are robust, but a few unknowns could slow future activity

On day three of the Global Business Travel Association’s 2018 convention in San Diego, the association revealed its 2017 measurement of global business travel spending—$1.33 trillion, a 5.8 percent rise over 2016—as well as its 2018 estimate, which is even more promising.

According to the GBTA BTI Outlook – Annual Global Report & Forecast released at the show, business travel spending is forecast to advance by 7.1 percent in 2018. “This pick-up in growth could signify an end to the ‘era of uncertainty’ in global business travel,” says Michael W. McCormick, GBTA executive director and COO. Furthermore, the association’s estimate of business travel spending by 2022—$1.7 trillion, which would represent 28 percent cumulative growth over five years—echoes McCormick’s sentiment.

“Era of uncertainty” is a reference to the 2012 to 2016 period, when growth in business travel spending ranged between three and five percent due to economic skepticism across the corporate sector. However, the 2017-2018 time frame is projected to be the strongest two-year period for business travel since the initial recovery from the recession of 2009-2011. In 2018, GBTA expects 18 out of the top 20 business travel markets to outpace their growth average over the last five years.

Even so, a few factors could still make the near future another era of uncertainty for business travel spending. For instance, “rising protectionism is coming at precisely the wrong time,” McCormick says. “The direction of trade policy is far and away the biggest wild card” that could cause companies to become more conservative in their expenditures and constrict business travel. Other factors include currency fluctuations, the sensitivity of the price of oil, and political and diplomatic friction between influential nations.

Market Share Shifts
The regional share of global business travel shifted only slightly since last year’s outlook, with Asia Pacific picking up one percent of market share and North America losing one percent, while shares in Europe, Latin America, the Middle East and Africa remained largely unchanged. GBTA expects the Asia Pacific region to gain another two percent of market share by 2022, while North America is expected to lose an additional one percent.

However, a more significant shift seems likely from the regional perspective. While the nations with the most-developed economies make up roughly half of the global business travel spending market today, India, China, and Indonesia now form their own segment and continue to grow at a rapid pace. This segment will pick up ground on the other major economic powers over the next five years, gaining $164 billion in annual spending by 2022. And GBTA projects this three-nation segment to be the largest in the world by 2035.