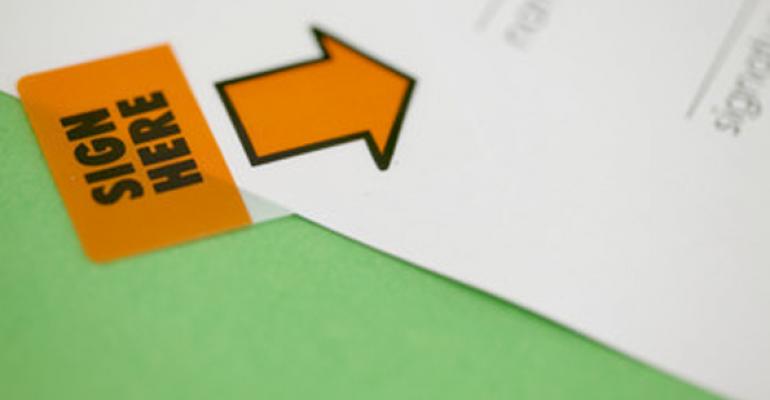 In a June 14 blog for HotelNewsNow.com, industry observer Patrick Mayock wondered where group business has gone, citing the growing gap between transient and group business (transient is always higher, but now the gap is 27 percent, up from 17 percent before the downturn), and the paltry increase in group demand through March 2014 (up 1.7 percent) year over year, compared to transient demand (up nearly 6 percent).

He should have been at the State of the Industry education session the day before at the Financial & Insurance Conference Planners Education Forum. Far from fretting about a lack of groups, hoteliers were instead concerned with the growing number of “second option” agreements being enacted, as group demand for the peak periods of 2014 goes through the roof.

“For the 20+ weeks that have no conflicts [holidays, school vacations, etc.], there is incredible pressure,” said Chris Hamaway, director of sales and marketing at the Montage Deer Valley in Park City, Utah, which hosted this year’s Education Forum. “I’ve seen more second-option agreements in the past four months than in the previous seven years. It’s becoming a weekly reality.” Which is a good thing, of course, except that for a hotelier trying to maintain all of his planner relationships, it’s also a challenge. “You want to make everyone happy,” he said.

So what is a second option? Planners often ask hotels to put a hold on dates they are strongly interested in, and expect to book. But if another planner comes along during the process and wants the same dates, and is willing to commit, the hotel may issue a "second option" contract with that group, after which the hotel gives the first group a fairly short timeframe (48–72 hours) to either sign the contract or release the dates.

Isabel Mahon, director, global sales, insurance, for Fairmont Raffles Swîssotels, is seeing the same pressure. “If it’s 2016 or ’17, I can hold the space. If it’s for 2014, we’re in our last selling window, so I can’t hold the space for six weeks. I am seeing more second-option contracts: I’ve had five in the past week for different hotels.”

Independent contractor Jennifer Squeglia, CMP, RLC Events, who moderated the discussion, empathized with planners who have to get decisions out of executives. When they finally do settle on dates, the planner no longer has flexibility, but now their preferred dates might be booked.

Even when you’re waiting for a decision, said one hospitality partner, you should communicate with the hotel. “If we get no information, we are in limbo,” this salesperson said.

Likewise, said another, sales managers have to be truthful when they get requests for high-demand periods. “Say, ‘I can offer you this rate on these dates for XX days.’”

Another hotelier said she was holding space for one client, but in the meantime another client traveled out to do a site inspection and was ready to book the same dates. So she asked the first client to become the second-option group.

“Our execs think everyone can wait for them,” said one planner, adding that if these decision-makers were to have the experience of "losing" some dates, they might feel a greater sense of urgency the next time. Another attendee said execs may not understand the big picture when it comes to booking rooms and meeting space, so they need to be educated.

Chris Hamaway suggested putting it in business terms: “Tell them that hospitality is one of the only industries that allows someone to put a perishable commodity on hold without risk,” he said. “we only get one chance to sell it.”