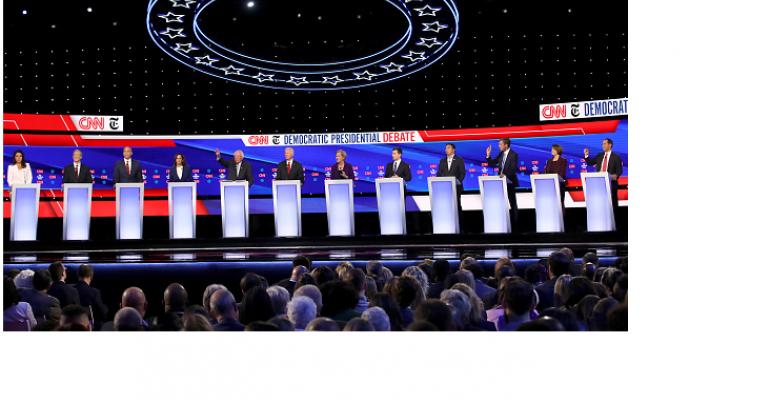 What the Primary Debate Organizers Could Learn from Meeting Professionals

If you’ve been tuning into the 2020 Democratic candidates’ primary debates, there’s a good chance, as people who plan meetings for a living, you’ve been pulling your hair out. I’m not talking about politics and issues here, just event communication basics.

It seems to me that the debate hosts could learn a lot from meeting pros who put a priority on community building, education, and communication. Let’s start with the most obvious weakness of the debates: Can you imagine what attendees would say on your post-event surveys if you put 12 people on a panel? Of course, a televised presidential debate is not a conference session, but both want to raise ideas and keep the audience engaged. Experienced moderators say that panelists who have to share their time with more than five speakers, tend to become anxious about getting their ideas across, and that has been evident in spades watching the Democrats work to get heard. And some don’t. In the October debate, Tom Steyer spoke for a third of the time Elizabeth Warren did (7 minutes, 13 seconds versus 22 mins, 47 seconds).

The debate organizers could also take a page from meeting professionals’ understanding of conference formats. In that recent debate, the 12 glowing lecterns aligned across the stage at Otterbein University in Westerville, Ohio, were professional but predictable. While it’s the default for our political debates, there are options. Canada held its Face-à-Face 2019 debate in early October in the runup to its October 21 parliamentary election and the candidates faced each other in a circle. And it wasn’t that long ago that primary debates were (gasp!) seated. (Here’s a C-SPAN clip of the 1988 Democratic primary candidates, including a very young-looking Joe Biden.)

It would be interesting to see how a meeting professional might change it up. How about a Pecha Kucha session format where the candidate addresses a topic with 20 slides for 20 seconds of commentary each (six minutes and 40 seconds total), or a 10-minutes-or-less TED Talk–style presentation inviting the candidate to go deep on one key policy idea. This is quite a stretch, of course, but it might not be less enlightening than the current format, and it could force candidates to push past superficial talking points and demonstrate how they think through complex problems. It could also address the third big issue with these events—the overall length. Any meeting planner knows that audience attention spans have become increasingly short. A three-hour debate might be fine for political junkies, but most people take their information in smaller bites. (Don’t get me started on the candidates’ seven-hour climate town hall. A massively important topic, but did anyone watch the whole thing?)

Would meeting pros really do a better job running this year’s presidential primary debates than the Democratic National Committee, with all the associated politics and posturing? Unlikely. But organizers would do well to pay more attention to the meeting design concepts that planners have honed to better communicate with their audiences and deliver inspiration and education. That’s not up for debate.

Meeting Setups Must Change. Here Are Some New Looks
May 20, 2020

Thinking Outside the Airport: Events Go Retro
May 11, 2020