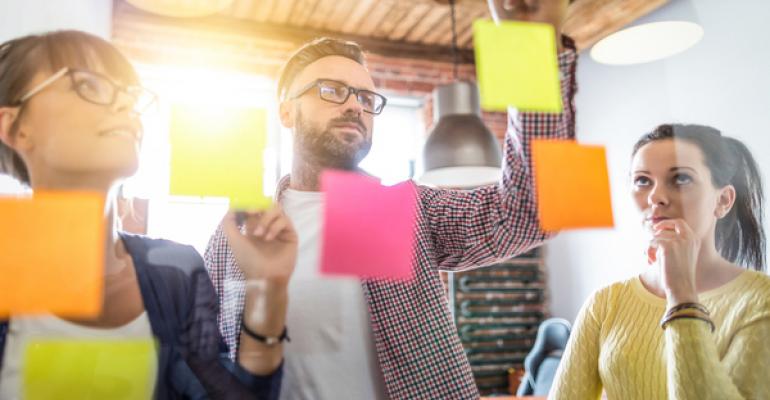 Something Else That’s Better In Person: Brainstorming

Academic research published in the journal Nature compares in-person and remote idea generation, and finds that too much focus might not be a good thing.

If you want your meeting designers to get creative, bring them together for an in-person brainstorming discussion rather than a virtual one. That’s according to the findings of an academic study recently published in the journal Nature that compares idea generation from in-person and online interaction.

For the study, researchers asked 300 pairs of engineers to spend five minutes generating creative alternative uses for a Frisbee and then to take an additional minute to select their best ideas. Half the pairs worked together in the same room; half worked remotely. The experiment was repeated with 334 more pairs who were asked to come up with creative uses for bubble wrap.

The result was a win for meeting face to face: Pairs who met in person came up with about 17 percent more ideas than the pairs brainstorming remotely. And when outside experts assessed the ideas, those generated by the in-person pairs were judged to be more creative.

The next question for the researchers, Melanie S. Brucks from Columbia University and Jonathan Levav from Stanford University, was why? What is it about virtual communication that dampens creative brainstorming?

Using eye-gaze technology as well as by asking subjects to recall objects around the room in which the experiment took place, the researchers found that remote pairs spend more time than in-person pairs looking at their partners (versus looking elsewhere in room). In short, they tend to focus mostly on the screen in front of them. This was significant because more time spent looking around the room correlated with creative idea generation.

“Even if video interaction could communicate the same information, there remains an inherent and overlooked physical difference in communicating through video that is not psychologically benign: In-person teams operate in a fully shared physical space, whereas virtual teams inhabit a virtual space that is bounded by the screen in front of each member,” says the study.  “Our data suggest that this physical difference in shared space compels virtual communicators to narrow their visual field by concentrating on the screen and filtering out peripheral visual stimuli that are not visible or relevant to their partner.”

The result, the researchers say, is that “as virtual communicators narrow their visual scope to the shared environment of a screen, their cognitive focus also narrows. This narrowed focus constrains the associative process underlying idea generation, whereby thoughts ‘branch out’ and activate disparate information that is then combined to form new ideas.”