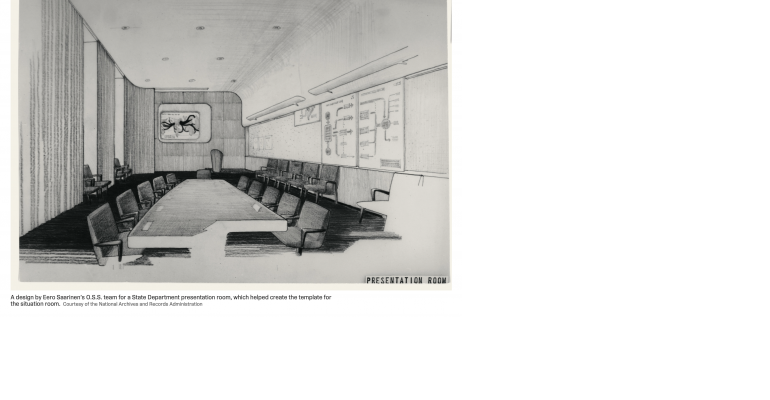 Some of the meeting rooms we use today were designed to mimic the “war room” first created for U.S. diplomatic, military, and spy-agency leaders.

To anyone involved in the planning of business meetings, a recent article in The New York Times presented an interesting rendering of a meeting room that, while 75 years old now, looks quite familiar.

The “war room” was created in 1944 by Finnish-born American architect Eero Saarinen. Though better known for designing the Gateway Arch in St. Louis, the TWA Terminal (now a hotel) at New York’s JFK airport, and his smoothly curved Tulip chairs, Saarinen served as a department chief in the OSS—the precursor to the CIA—during World War II. He oversaw all visual communication for the OSS. His mission: Compete with Adolf Hitler's propaganda machine for maximum reach and impact. His work included models of new weapons and devices, models for use by military schools, graphic public propaganda—and the design of the U.S. State Department’s presentation room.

With lots of smooth curves rather than abrupt angles at the edges of the ceiling, walls, table, and chairs, Saarinen offered a more soothing design for those involved in serious and tense work. And with areas carved out for multiple flip charts and a presentation screen (that in just a few years would be able to show live video feeds from other government and military outposts), the room was designed for attendees to present a lot of information quickly and then discuss conclusions and next steps, with internal power relationships accounted for in the seating arrangement. It’s no wonder, then, that many corporate headquarters and higher-end meetings hotels have boardrooms that closely resemble Saarinen’s design

For meeting planners, the most interesting points in the long NYT article lie in the final few sentences: “Half a century later, ‘situation rooms’ like this had become theaters of 24-hour pseudo-debate, as in the eponymously titled news show on CNN, or arenas for projecting presidential power, as in the famous image of President Barack Obama and his advisers watching the 2011 assault on Osama bin Laden’s compound. The wartime alliance between design and power did not produce a more peaceful world—only one in which the art of presentation came to overpower our understanding of that world.”