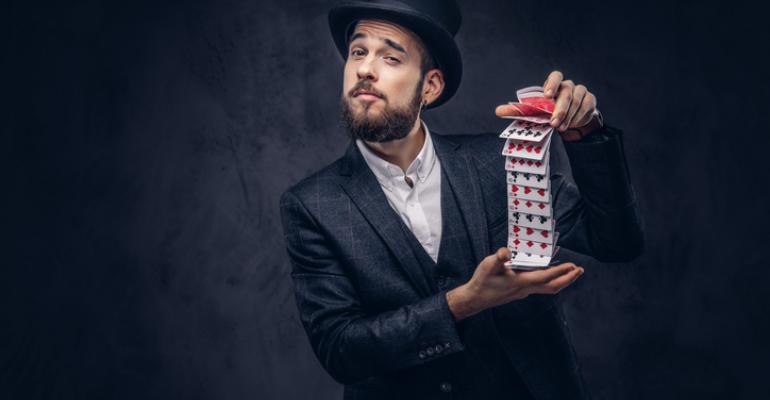 Making Magic at Meetings: A Guide

The headline isn't metaphorical—here's how to have a magician entertain guests without being corny, or cornering.

Inventive performers strive to keep event organizers interested year after year through variety. But magic is not as widely respected as a performance art as most others partly because of how it is positioned, how it is used, and because many magicians have allowed their acts to become tired. Notwithstanding the success of magic productions in Las Vegas and London's West End, as well as high-profile television magicians, there's a sea of sameness in magic. Apple’s innovation resulted in iPad magicians and some embracing the use of mobile apps, but even from the inside, working more than two hundred events each year, I’d struggle to name any other imaginative alternatives available to the events industry when it comes to magic.

Magicians have been performing short shows at tables, commonly known as “table hopping,” since the late 1980s. The doyenne of magic, Fay Presto, was perhaps the first magician to present in this format of short, punchy shows at tableside, moving between groups of diners. The classic variation of this is the “mix and mingle” format where the magician strolls around a reception entertaining informal groups of guests. But the entire magic industry jumped on that bandwagon and is still riding it some forty years later, with little development or creative variation to excite event professionals.

The result is that magic is not valued, and the ideal circumstances for showcasing magic at its best are not being leveraged. I care passionately about magic being performed well—about the memorable moments of disbelief and wonder I am privileged to create for people who will remember them for years afterward. Done right, magic can be a profound experience for audiences.

I’ve been collaborating with event planners to make magic more impactful and to raise the return on investment from using a magician. Now that clients are spending cautiously and making last-minute decisions more frequently, it feels that now is the time for us all to work together and show that with a little creative thinking we can enhance any event—not by repeating what we have seen before but starting with a blank page each time. We must constantly improve the routine, and never settle on it being “finished” or “complete.”

Here's how event organizers can consider using magic to create something that guests haven’t experienced before.

1. In place of interrupting people’s conversations at a dinner table, I’ve worked with event organizers to create experiences that feel new by maximizing the use of the guest-arrival period or room-transition times by performing in areas of the venue where guests naturally gather. A simple adjustment from standing alongside tables can make this approach remarkably effective. By performing short parlor-style shows where groups of people informally watch, the magician is helping to generate energy, excitement, and talking points by prompting laughter and other reactions.

2. Short shows can be performed for small groups in a dedicated room alongside a reception or in a small draped area carved out within the main event space. The twist: Guests are asked not to share with others what happened while they were inside. From outside the area, people can hear the commotion and excitement and become interested in being part of the next performance.

3. Set aside a small table in the main event room and arrange seating around it. Those who wish to indulge in the entertainment will enjoy intimate, personal performances of magic; as more people gather around, the magician adapts the pace and tone to the audience, performing slightly larger pieces that involve more of the crowd. In this setting, guests can stay for as long as they like, creating an ever-changing dynamic—some settle in with their drinks while others drift around to the visit other attractions the room has to offer.

There are some wonderfully imaginative alternatives to the traditional magician's act, and if event professionals work closely with the performers, we can continue to offer unique, exciting, and genuinely memorable ways for people to experience this art form.

Jez Rose is The Unusualist, performing for business events and private parties. He is an associate member of The Inner Magic Circle (with silver star) in London; a member of The Academy of Magical Arts in Hollywood; and resident Curator of Magic for Ned’s Club at The Ned in London.