Design Thinking: How an Event Got Its Name

Maritz executives discuss “and thinking,” and the aspirations of its Next& customer and supplier event.

When Greg Bogue worked on the design of the summer client/supplier event for Maritz Global Events, he was inspired by the world of improv theater where the magic phrase is “yes, and” as opposed to “yes, but.”

The former initiates a collaborative response, while the latter can inhibit conversation. “We picked up on that,” says Bogue, enterprise vice president, brand, experience & innovation ecosystems at MGE. “We wanted to create a sense of ‘and’ thinking. We were going to be additive. We were going to be positive about the industry, where we are, and what our outlook is.” That was one step toward adopting the Next& name for the in-person August 17-20 event at the Hyatt Regency Seattle.

During the initial design session for the event, “canvas” emerged as the organizing principle, says Bogue. “We wanted to create a situation where people were creating what could be next … where people felt like they were adding to the future of our collective success.” 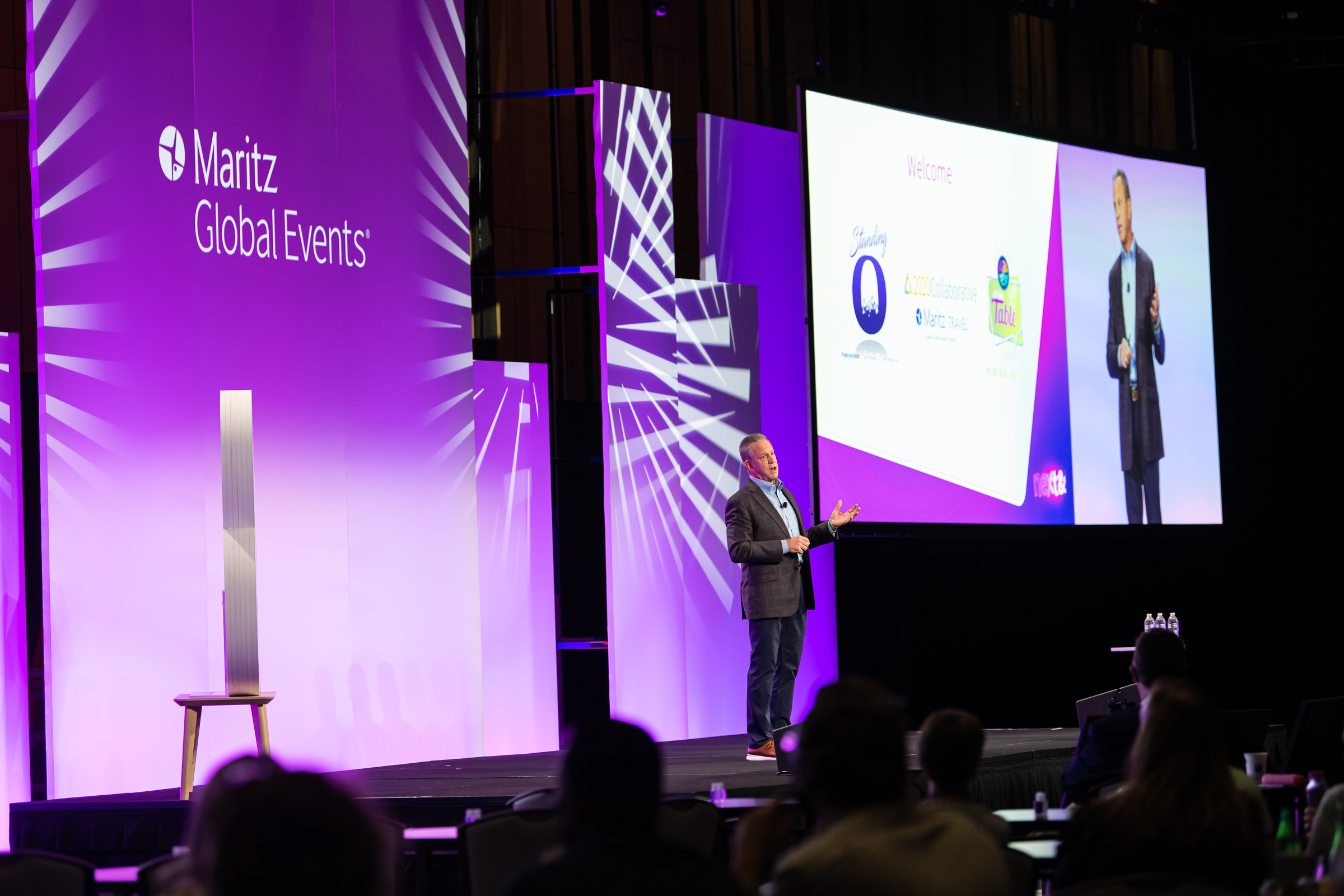 Adding to that, company president David Peckinpaugh (left) says, “It was also really important for us to see this event as a launching pad and not a rearview mirror, looking back. … The focus was on the ‘and’—what's next, and how do we evolve our business, our clients’ businesses, our suppliers’ businesses, and therefore the industry as a whole, knowing that we can't be the same coming out of this as we were going in. If we are, then we've done something really wrong; we've wasted a great crisis.”

Design Choices
Maritz had used the name “Next” for its month-long online community event in February. So, tying together its ambitions for the in-person meeting and the positivity in the improv concept, the company settled on Next& as the name of its new event.

Designing an agenda for the approximately 500 attendees in Seattle that would allow collaborative thinking to root was the next phase. Next8 was a “mashup,” says Peckinpaugh, of the three client and supplier events Maritz ran pre-pandemic—Collaborative, Envision, and e4—and it took their same approach to experimentation. “Our position has always been that we'd rather test things on ourselves and our audiences before we take it to market and have one of our clients take a risk,” Bogue says.

The design team created an agenda intended to give attendees a sense of “transparency, autonomy, and purpose,” Bogue says. Here are three choices they made to create that experience:

Give attendees space. Over all the agenda was “light and airy,” says Bogue. “We didn't start first thing in the morning. We started at 9:00 a.m. and gave people that morning time to participate in a variety of optional things. We eased into each day and that was intentional. We really wanted people to have the opportunity to wake up and get themselves together.”

Don’t over-schedule. “Very purposefully we would not let any session go beyond 45 minutes,” says Bogue, noting that even the general sessions were 45 minutes, followed by a 30-minute break. “What we wanted to create is a sense of autonomy, a sense that you're not trapped in a room with a mask on. We purposefully broke up the day into chunks, with an extended lunch period of about 90 minutes.”

Design for collaboration. While the sessions were short, the agenda allowed attendees to dive deeper with creative follow-up breakouts. For example, one morning included three all-attendee “focus sessions” (“People First,” “the Business of Events,” and “Creating Next& Experiences”). In the afternoon, the audience broke into more than 30 groups of 12 to 15 people, each with a moderator, for “studio sessions” looking at the post-pandemic challenges discussed in the morning. Each small group attended three studio sessions, and here was the twist: As groups moved from one studio session to the next, they were asked to refine the ideas discussed by the previous group. “You had one idea that started with the first group, and the second group came in and refined it, and then the third group finalized it. So, you have a collaboration of three different sets of people all working on the same issue that was defined by the first group.”

“What happened is we got people talking about those challenges. That was the real beauty, the conversations that happened,” said Bogue.

For many attendees Next& was their first time on the road since before the pandemic. While masking was required, there was energy around just being together. “The desire for human connection is so strong,” says Bogue. “In the design, we wanted to create ample opportunities for spontaneous collisions to occur.”