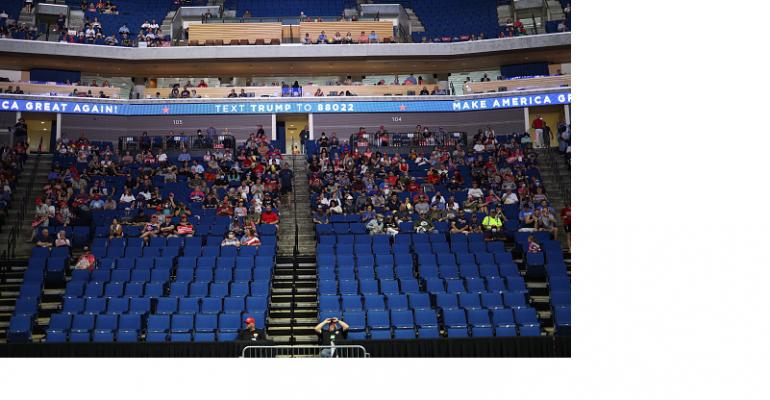 5 Lessons from Trump’s Rally in Tulsa

The underwhelming turnout at the President’s campaign event has a few things to teach meeting professionals.

When President Trump returned to the campaign trail with a rally at the BOK Center in Tulsa, Okla., on Saturday, the event was widely seen as a disappointment. Turnout was reportedly less than 6,200 supporters for an event that organizers had expected to fill the 19,000-seat venue, and an outdoor speech before the rally had to be canceled because the expected overflow crowds never materialized. While the reasons for the sparse rally are still being debated, planners from all political stripes can learn from the campaign’s missteps.

Consult the calendar before planning an event.
Plans for the rally got off to a controversial start when organizers scheduled it for June 19, the day marking the end of slavery. Planning the event on Juneteenth was seen as an insensitive gesture in the wake of weeks of nationwide protests against racism in America. Be sensitive to how your organization is perceived (an oil drilling company annual meeting might want to avoid Earth Day) and what your attendees value (the weeks of Chinese New Year celebrations are a time when many Chinese people travel to visit family.)

Online influencers have an impact.
The news that TikTok users mobilized to reserve thousands of tickets for the Tulsa rally that they never intended to use, thereby inflating the campaign’s attendance expectations, is a reminder to respect the power of social media and the influencers involved in your event. While meeting planners are unlikely to get trolled by teenage activists, social media can have a persuasive impact—positively or negatively—on how audiences engage with your event and its content.

Keep your data clean.
A few days before the event, Trump campaign manager Brad Parscale tweeted his excitement: “Just passed 800,000 tickets. Biggest data haul and rally signup of all time by 10x.” As event planners know, data analytics is the ticket to targeted promotions, understanding your audience, and personalizing the attendee experience, but in Parscale’s case, he may be wondering about the validity of his data given the unusually low turnout and the TikTok campaign.

The pandemic cannot be willed away.
It’s unknown whether Trump supporters stayed away from the Tulsa rally over coronavirus concerns. It also remains to be seen if the rally, where most people did not wear masks, will be the source of new infections. However, the threat was made clear when, before the event, six of the campaign’s advance team tested positive for COVID-19. Meeting pros need to consider how to keep both their attendees and staff safe as the industry moves toward reopening and how to communicate their efforts to potential participants.

Anyone attending the rally in Tulsa had to sign a waiver, agreeing to assume all risks related to exposure to the coronavirus. Interestingly, however, this article from Reuters argues that the waivers are unlikely to hold up in court.

Carefully consider your messaging.
Parscale boasted repeatedly that hundreds of thousands of people had reserved tickets for President Trump’s rally. While this messaging was intended to show strength and build enthusiasm, could it have done the opposite? Potential attendees may have been disappointed by the news that they might not get a seat in the BOK Center or deterred those who believed a monster-size crowd would be more likely to spread coronavirus.

Also, smart, flexible messaging might have helped the campaign once it became clear that the rally’s attendance would top out at less than a third of the arena’s capacity. Could organizers have spread out attendees around the venue according to social distancing guidelines then reframed the narrative from “underwhelming crowd size” to “valuing everyone’s safety”?