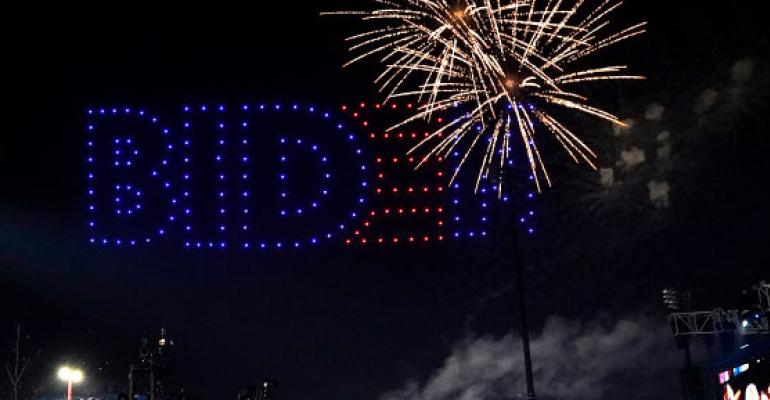 The celebration in Wilmington, Del., on Saturday night provided lessons for meeting organizers.

On Saturday evening, about eight hours after the Associated Press and other media outlets called the presidential election, the Biden-Harris campaign held a victory event outside the Chase Center on the Riverfront in downtown Wilmington, Del. Politics aside, there was a lot for meeting professionals to take in as they watched:

Drive-in Theater. Like many of its events on the trail, the campaign held the Wilmington celebration as a drive-in rally to reduce the risk of spreading Covid-19. As the television cameras swept over the parking lot of supporters, it appeared that mask use was close to 100 percent. However, the enthusiastic crowd might have gotten a little loose with social distancing protocols. Supporters sat on car hoods and in the beds of pickup trucks cheering and waving flags, but it appeared a lot of people were also out of their cars meeting and greeting. If a drive-in event is good enough for an in-coming president and vice president, maybe it’s good enough for your regional sales meeting or other local gathering. Just beware of human nature: Everyone likes to network.

A Fleet of Drones. The fireworks at the event were nice, but the synchronized drones were amazing. After the evening’s speeches, a fireworks display lit up the sky, and shortly after, a collection of lighted drones, perhaps hundreds, began their show. They created the Biden campaign logo, an outline of the United States (which then filled in with blue and red lights), the number 46, and more, all with fireworks continuing in the background. The show raised the bar for pyrotechnics and, when budgets are right, planners should expect to see drone displays on their clients’ wish lists.

Building the Brand. The victory event was a good reminder for planners to consider all the elements in a meeting that could signal the organizer’s values and brand messages. In this instance, the stage was lined with American flags, which was appropriate and expected. Then Vice President-Elect Kamala Harris walked on stage wearing suffragette white to the strains of Mary J Blige’s empowerment-themed song “Work That” to underscore her history-making accomplishment as the first female vice president. And when President-Elect Biden finished his speech, organizers again used music to double down on the message, playing Tom Petty’s “I Won’t Back Down.”