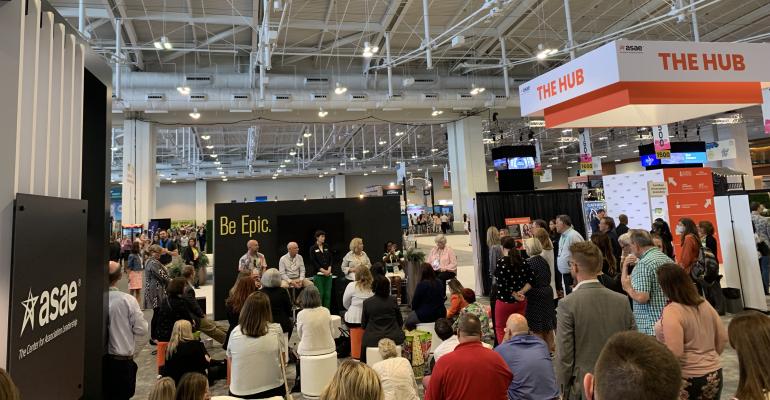 The center of ASAE's trade-show floor featured The Hub, which connected to other show elements via a "highway" that offered group games and networking areas.
Meeting Planning Toolbox>Event Design & Ideas

3 Ideas You Can Use from ASAE’s Annual Meeting

A couple of energetic show-floor elements, a fun sponsor opportunity, and advice on how to experiment with new ideas without your board breathing down your neck.

When more than 5,000 attendees, exhibitors, and sponsors rolled into Nashville in late August for the annual meeting of the American Society of Association Executives, their enthusiasm made it clear that they were ready for an experience that felt like those that happened before the Covid pandemic dropped the hammer in early 2020.

While such enthusiasm is a wonderful thing, every event needs fresh elements to maintain that energy and send participants home not just with new contacts in the industry but also ideas they can use.

Here are three such ideas that MeetingsNet found while moving through the annual meeting: one from ASAE, one from a sponsor, and one from the keynote speaker.

The Hub and Hive Highway
When attendees entered the exhibit hall at Music City Center, they encountered a road that would lead them to The Hub. That area, set in the center of the show floor, featured show-information booths, refreshment stations, and a presentation space (photo above) that hosted several panel and Q&A sessions throughout each day. 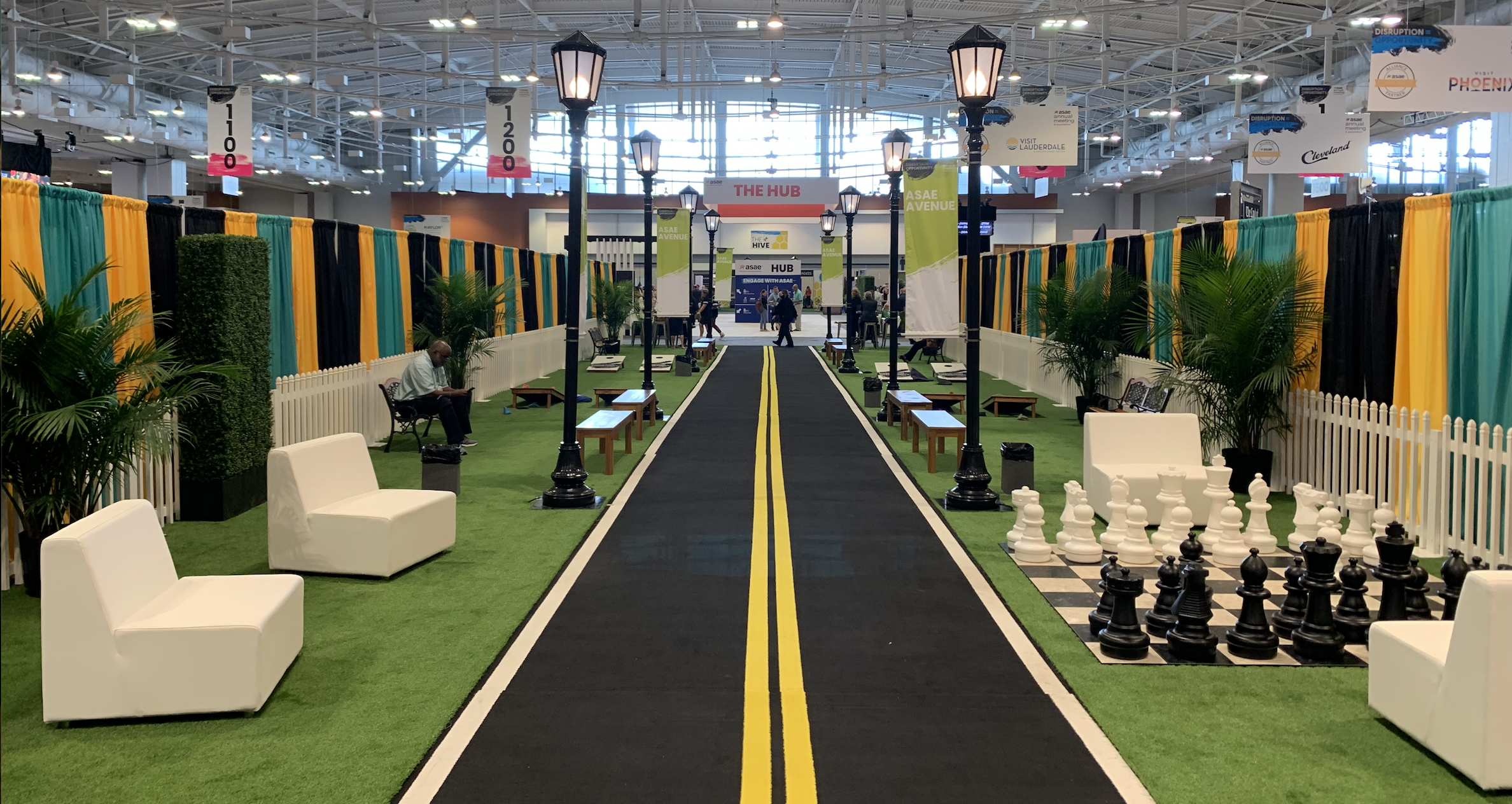 But before getting there, attendees could stop along the road (in photo) to play group-friendly games on a giant chess board or at cornhole stations, or simply sit with colleagues to chat for a few minutes. 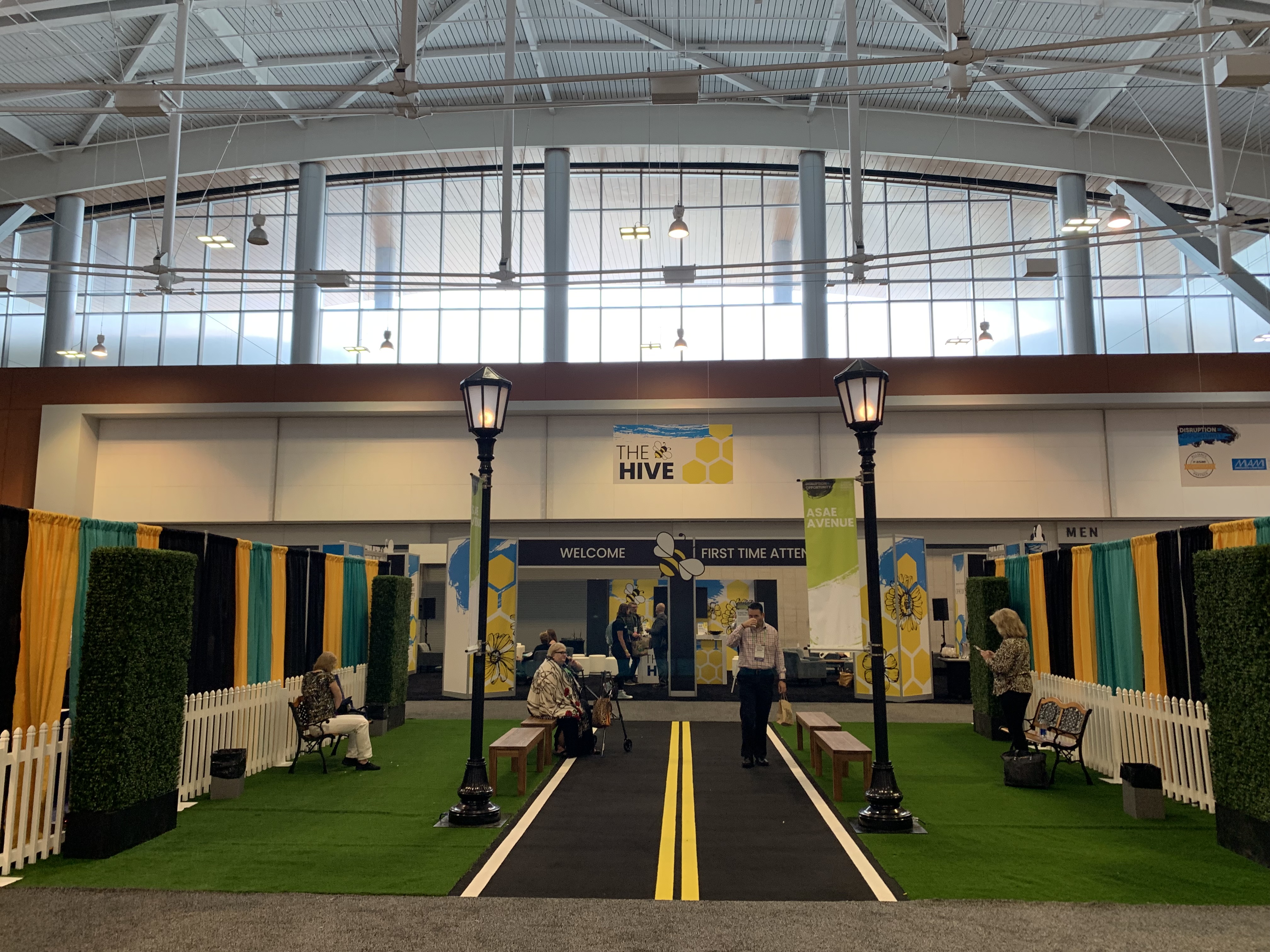 And just beyond The Hub, the road continued to The Hive (in photo), an area dedicated to first-time attendees—whom ASAE calls “new-bees.” There, first-timers could meet each other, confer with an ASAE staffer about the show’s agenda or layout, and obtain a sticker for their name badge identifying them as a first-timer so that others might make them feel more comfortable as they make their way around.

Funny Business
Here’s one way for a sponsor to make a lasting impression on attendees: keep making them laugh as they walk around the convention center. 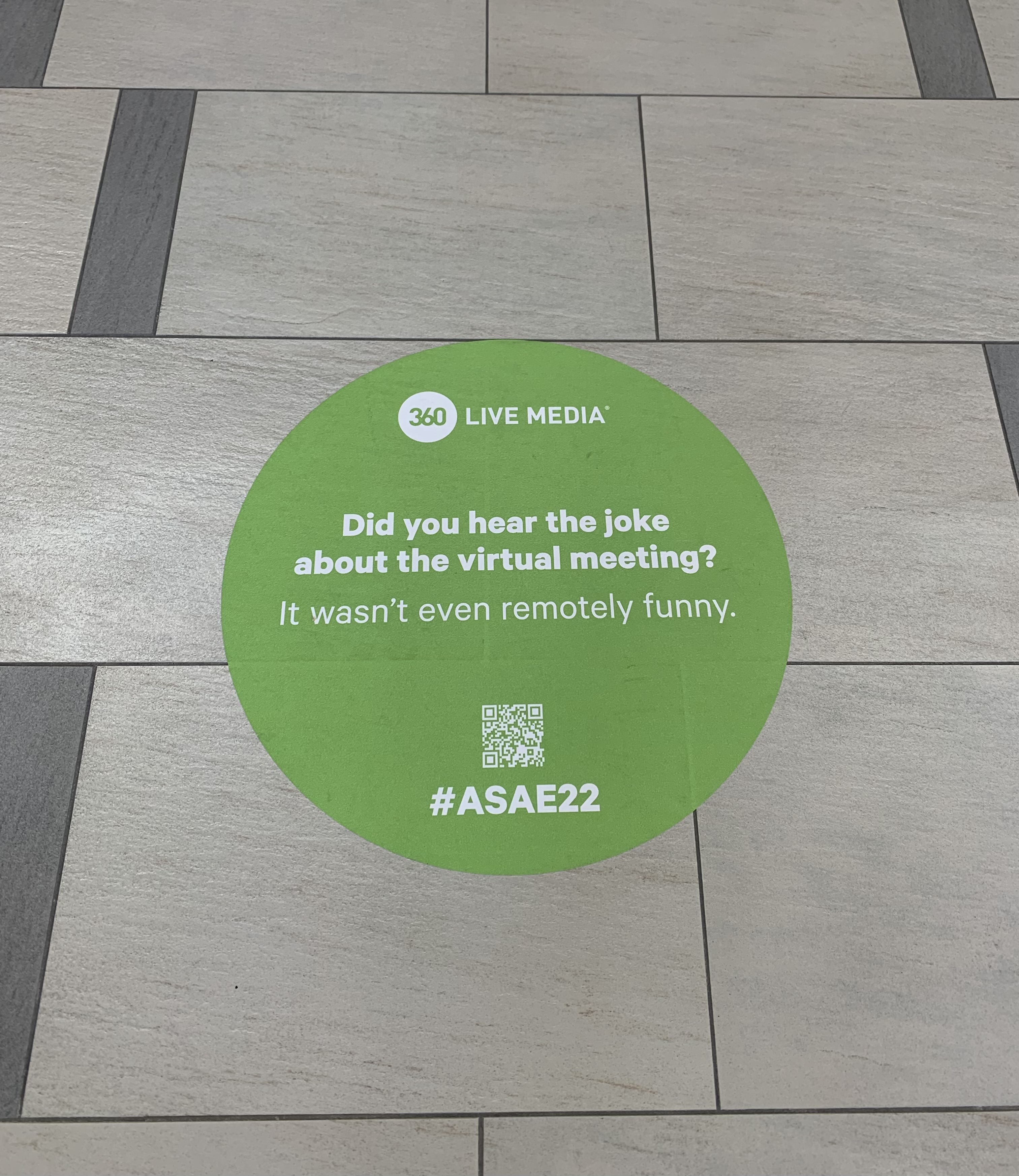 One ASAE event sponsor, 360 Live Media, used a series of floor stickers (in photo) to deliver goofy meetings-related jokes to attendees as they walked to and from the exhibit hall. At the bottom of each sticker was a QR code that would bring attendees directly to the company’s web site.

Under-the-Radar Innovation
ASAE’s first-day keynote speaker, former Synta Pharmaceuticals CEO Safi Bahcall, told attendees that while innovation should be a constant element of an organization’s operations, it can be done incrementally enough to not upset the apple cart beyond the department. As a result, planning teams should not be afraid to run experiments—even if it means keeping them from the board so that there’s no stalling or meddling on a project.

Bahcall cited three signs of stagnant cultures that don’t allow for experimentation: a fear of internal judgment or stigma that comes from failure; a bureaucracy that makes it hard to launch experiments; and no framework for supporting the ideas that people propose.

His four bits of advice for planners seeking to get creative and run innovative experiments:

• Celebrate “good fails.” If you can draw lessons from them, they aren’t failures but rather steps in the path to success.

• Balance your relationship with creative, big-picture people and pragmatic, detail-oriented people on your team. Both are necessary for innovation to succeed, so plan their roles and your communication with them accordingly.

• Avoid looking to the CEO or COO as the generator of creative ideas, but rather as the shepherd of them.

• On the other hand, having urgency around experiments is more important than letting everyone know what you are doing and how you are doing it. Each idea will have allies, skeptics, and blockers. So, unless you need money from the board to run an experiment, do what you can and, once you have some data, use it to convince any skeptics. From there, it might be possible to get some more money to broaden the effort.