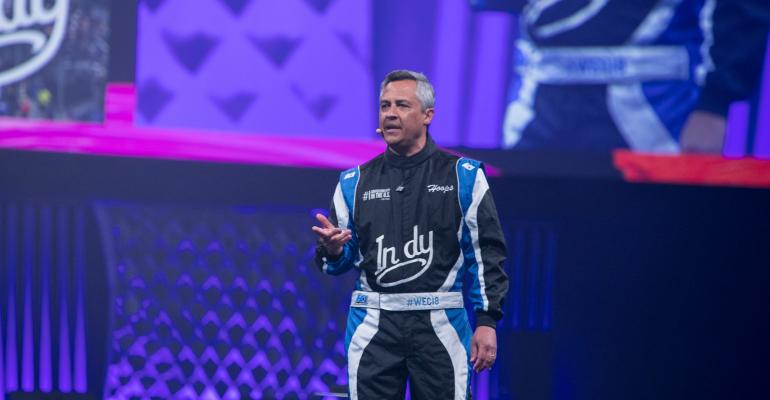 What’s a Meeting Industry Meeting Worth?

Visit Indy’s president and CEO explains what it took to bring Meeting Professionals International’s World Education Congress to his city—and why it was worth it.

Indianapolis may not yet be the equivalent of France’s City of Lights, but according to Visit Indy President and CEO Leonard Hoops, his city is bucking to become the Paris of the prairie, especially for meetings. “When people say, ‘But you don’t have an ocean or mountains,’ I say, ‘Neither does Paris!’” he said at a press conference held during Meeting Professionals International’s World Education Congress, held in Indy June 2–5.

What his city does have is a recent $3 billion investment in infrastructure—including a doubling of its Indiana Convention Center to 566,000 square feet of contiguous exhibition space, and the new Lucas Oil Stadium that is connected to the center—since 2004, when the Professional Convention Management Association held its annual meeting there. It also boasts an airport, complete with a LEED-certified terminal, that has ranked first in customer service for six years running, and a slew of new and upgraded hotels, 12 of which are connected via skywalks to the convention center. And more hotels are in the works, including a 316-room Hyatt Place/Hyatt House combo that’s opening in 2019, and a 146-room boutique hotel building built by upscale homewares store West Elm as part of a $260 million mixed-use development at the site of a former Coca-Cola bottling plant. Also breaking ground in the near future will be new properties from Aloft, Kimpton, and InterContinental. As Hoops mentioned several times over the course of WEC18, there are lots of reasons USA Today ranked Indianapolis, the 12th largest U.S. city, first in its list of the 20 best U.S. convention cities.

However, while Indy is already a pretty popular destination for association conventions and trade shows, the city wants to grow its share of the corporate group market. That’s where WEC18 came in, he said. “Given the predominance of corporate event strategists that are part of MPI’s family and member base, that was an attraction.”

It Took More Than a Village to Raise WEC’s Villages
WEC18, which took place in the Indiana Convention Center, got innovative to make use of the center’s huge expo space, setting up “villages” for four topical areas: Innovation, Social, Experiential, and Leadership. Organizers also replaced the usual general sessions with a series of Pep Rallies, complete with bleacher seats that the center had on hand for its sports program.

But, as Hoops said, it took more than a village to bring WEC18 to Indy. It took 63 sponsors to raise the $1.8 million needed to pull it off. The Capital Improvement Board of Marion County, which uses regional tax revenue to fund Visit Indy, the convention center, the stadium, and other facilities, and Visit Indy came up with the lion’s share. The hotel community, seeing the potential return on investment down the road, also contributed, as did the Indiana Economic Development Corporation, which funded the opening celebration on Saturday at the White River State Park, along with 59 other entities.

Pulling it all off also took a lot of teamwork, he added. There was an organizing committee of 60 people from throughout the state—“It really was a state-wide effort”—that collectively spent 500 hours as a group, and many thousands of hours individually, he said.

CSR Without Par
Because Indy prides itself on more than being a sports city, it also wanted to highlight the corporate social responsibility and sustainability opportunities it offers for groups.

“When MPI has a past chair like Fiona Pelham [CEO of Positive Impact Events, which seeks to improve the event industry’s social, environmental, and economic impact], sustainability’s always top of mind,” said Hoops. “We used ISO Events Sustainability Management System Standards as a focus for our waste diversion—composting, recycling, and rescuing pounds of food by Second Helpings, one of our main food banks in Indianapolis.”

Many of the community service projects that came into being in conjunction with Super Bowl XLVI, which was held in Indy in 2012, are now permanent fixtures in the community, Hoops said. WEC18 collected donations for the Julian Center, a shelter and service provider for survivors of domestic violence and sexual assault; collected new and gently used clothing and jewelry for Dress for Success, which empowers women to achieve economic independence via attire and support. “Through something called Cheeriodicals, we’re delivering more than 500 care packages and get-well gifts to The Peyton Manning and Riley Children’s Hospitals." Two other organizations that benefited from WEC18 were Teachers Treasures, a local charity that helps at-risk children by providing supplies to their teachers; and Random Acts of Flowers, which supplies flowers to hospital patients and others who could use a pick-me-up gift.