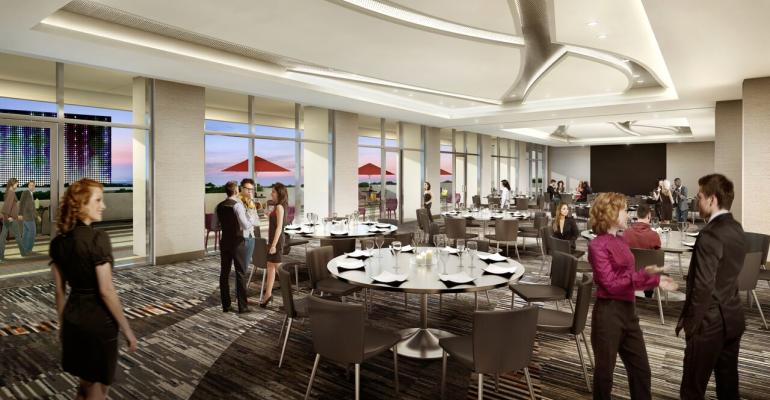 Small-Meeting Hotel to Open Next to Daytona 500 Racetrack

Just a few weeks after the Daytona 500 auto race comes to Florida's east coast in late February, Daytona Beach will see the debut of its first full-service hotel situated next to Daytona International Speedway. The DAYTONA, an Autograph property, features 144 guest rooms, 2,500 square feet of indoor meeting space plus an adjacent 5,000-square-foot terrace that overlooks a new retail, dining and entertainment district called ONE DAYTONA. Groups can also shuttle across Daytona Boulevard and use the speedway's upper-level restaurant and suites for receptions and dinners that overlook the racetrack. Those spaces were refurbished extensively in 2016.

The six-story hotel features a sleek and modern design that pays homage to the local motorsports history. Amenities include a full-service restaurant and bar, on-site shopping, a heated pool with private cabanas, an outdoor fire pit, and fitness center. A second-floor lobby area will feature “The Grid,” where show cars will be on display year-round, near the meeting space and outdoor terrace which has views of Vegas-like synchronized fountain shows in the entertainment district, known as Victory Circle.

The DAYTONA is located 4.5 miles from the 300,000-square-foot Ocean Center, an exhibition and convention facility along the Atlantic Ocean, and one mile from Daytona Beach International Airport.