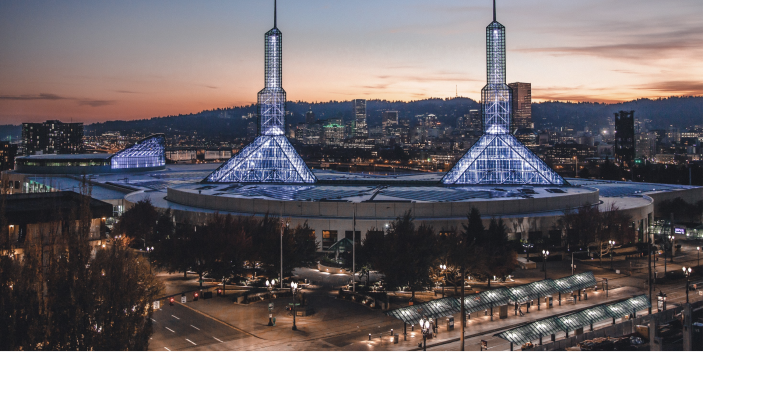 The largest convention center in the Pacific Northwest is getting an update, while a new headquarters hotel and other properties will boost the city’s guest-room count 42 percent by next year.

For more than a decade, Portland, Ore., has been at the forefront of the sustainable events movement: In 2004, its Oregon Convention Center was the first convention venue to earn the U.S. Green Building Council’s Leadership in Energy and Environmental Design (LEED) certification. Since then, the building has achieved LEED Platinum status—the highest rating—by continuing to implement environmentally friendly initiatives. For instance, its 5.5-acre roof acts not only as a rain garden that filters water before it flows into the adjacent Willamette River, but it’s also home to solar panels that deliver 25 percent of the facility’s energy. Inside the building, ample natural light and sensor-directed lighting allow for automated dimming that saves energy, while 66 percent of all event-related material and food waste is diverted from landfills through recycling and composting.

Even with that focus on an issue so important to the association community—as well as having more than 255,000 square feet of exhibit space, two ballrooms, and 52 breakout rooms—the Oregon Convention Center was unable to lure conventions and exhibitions beyond a certain size. The reason: Only about 1,100 hotel rooms were within walking distance of the center, which sits across the river from downtown Portland and is a 10-minute light-rail ride from the hotels there.

Come early 2020, though, the center will be appeal to a larger percentage of the association market thanks to the opening of the Hyatt Regency Portland at Oregon Convention Center. The 600-room property (pictured below), with 38,000 square feet of meeting space itself, is being built on the center’s north side, where a tree-lined outdoor plaza connects the two venues as well as the light-rail station. What’s more, several 110- to 225-room properties—from Curio by Hilton, Hyatt Centric, Hyatt Place, and Radisson, among others—have opened in the past year or will open in the next year not just in the trendy, restaurant-heavy Lloyd neighborhood around the convention center but in the adjacent downtown and Pearl districts. As a result, Portland will have 10,700 rooms available by late 2020 versus just 7,500 in 2016. 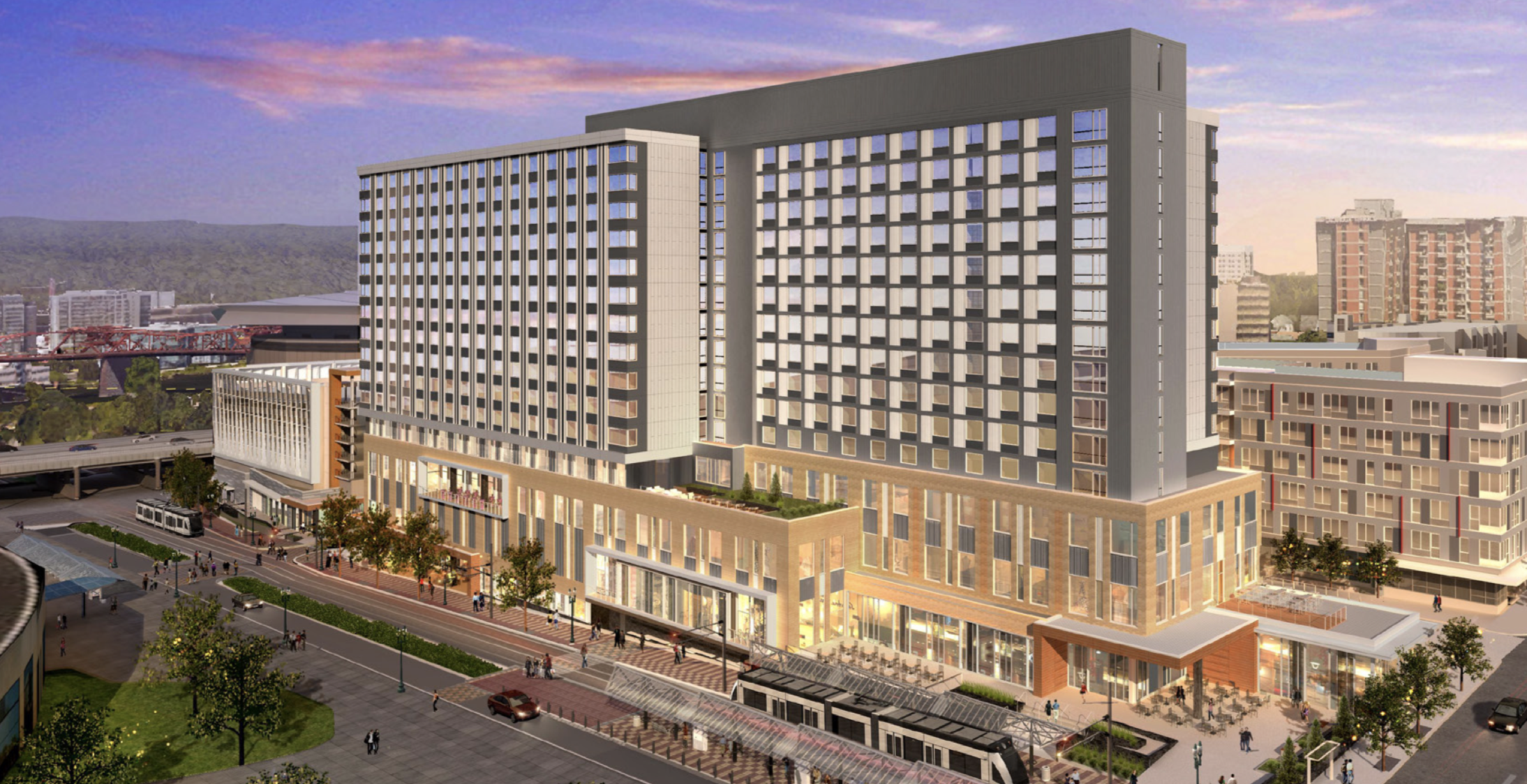 According to Travel Portland, the convention and visitors bureau, 30 new conventions have booked the Oregon Convention Center as of May 2019 because of the new headquarters hotel, pictured below.

Ahead of the Hyatt Regency’s opening, the convention center will complete a $39 million renovation by October that will refurbish the outdoor plaza and update the ballrooms and public spaces in a way that echoes the Pacific Northwest’s natural landscape. Specifically, carpeting throughout the facility has been replaced (and all the old carpeting and padding recycled); ceilings resembling a forest canopy installed along with lighting that accentuates them (pictured below); wall coverings and artwork updated; and public spaces redesigned to improve usefulness and interaction as well as ambiance. Craig Stroud, executive director of the center, says that the overarching goal of the renovation was to provide a more polished feel that matches the sleek design of the new Hyatt Regency and the surrounding Lloyd neighborhood. 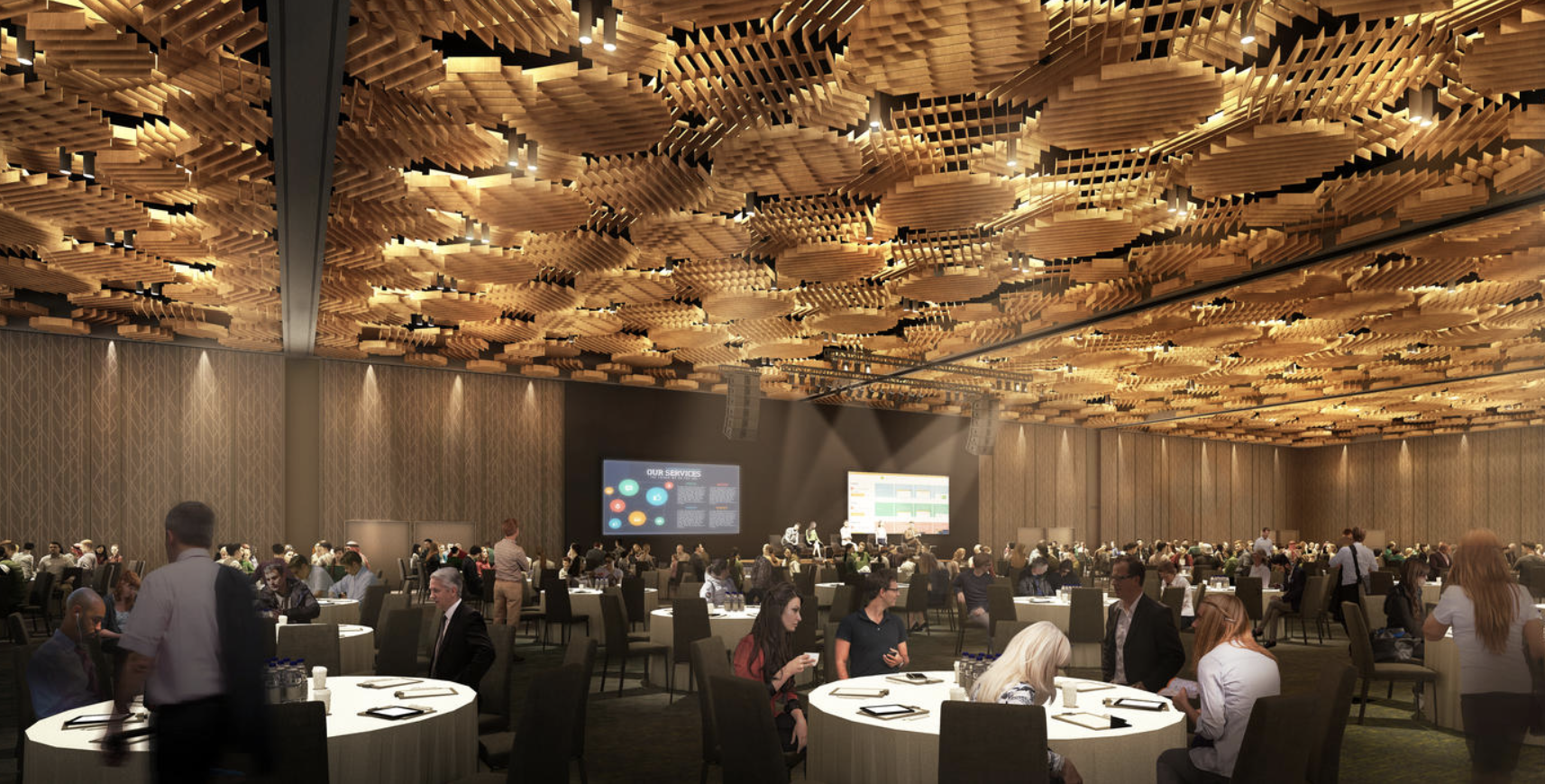