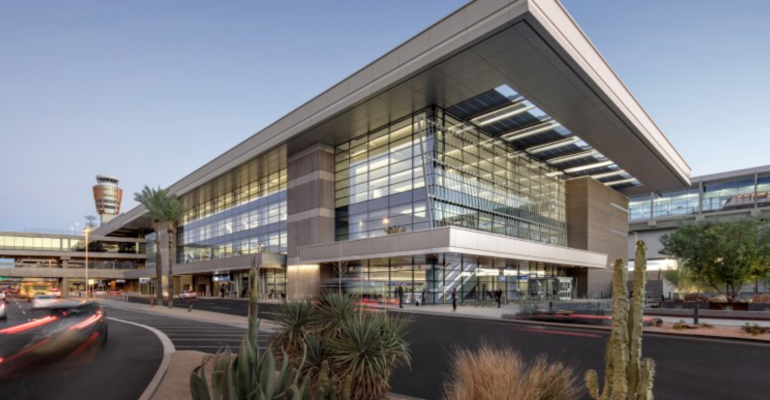 Terminal 3 (Delta and JetBlue) is almost complete, while Terminal 4 (American and Southwest) is next.

Given that Phoenix Sky Harbor International Airport saw a 2.3 percent rise in passenger traffic in the past year—to a total of nearly 45 million people—the unveiling of a substantial upgrade to Terminal 3 and the preparation of Terminal 4 for refurbishment comes at just the right time.

With airport lounges important to frequent travelers, American and United have joined Delta in upgrading their offerings. In fact, American has invested not just in its Admirals Club lounge in Terminal 4 at Sky Harbor, but has invested $200 million worldwide to improve its Admirals Club lounges. United has a lounge in Terminal 2 and will build a new one when it moves to Terminal 3, though there is no firm date for that move.

Southwest is one of the largest carriers in and out of Phoenix, and will expand its presence by taking over another concourse in Terminal 4 by 2021, which will give the airline eight more gates. Come that time, the $250 million upgrade to Terminal 4 will be more than halfway done; the project will wrap up by early 2022, benefiting passengers on American Airlines and British Airways as well.

JetBlue began new year-round service between Phoenix and Fort Lauderdale in February, a daily nonstop flight served by an Airbus A320. Also, Condor Airlines is increasing its nonstop service between Phoenix and Frankfurt, Germany to three days a week from May through October, using a Boeing 767-300ER with more than 250 seats. Each Condor passenger receives complimentary checked baggage, beverages, meals and in-flight entertainment. In total, Phoenix Sky Harbor has nonstop service to more than 100 domestic destinations and 22 international destinations.