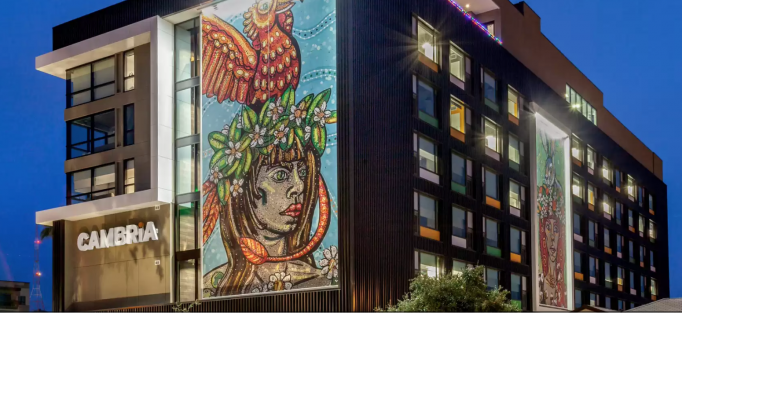 Boutique property located near the convention center has a rooftop lounge and building-high mural.

Downtown Phoenix has benefited from more than $5 billion in investments in new hotels, restaurants, retail outlets, and offices across its nearly two square miles. More than 4,000 of Greater Phoenix’s 66,000 hotel rooms are there, close to the Phoenix Convention Center. The latest property to open in its artsy Roosevelt Row neighborhood is the Cambria Hotel Downtown Convention Center.

The $26 million new-build property has 127 guest rooms and suites and is a nine-block walk to the convention center and a seven-block walk to the Sheraton Phoenix Downtown that’s often used as a headquarters hotel. The hotel has 900 square feet of dedicated meeting space plus additional public space all designed to accommodate up to 100 attendees. It’s a few minutes’ walk to some of the city’s unique venues such as the recently renovated Orpheum Theater, Symphony Hall, the Herberger Theater Center, and The Churchill, a hip indoor/outdoor food court with live music that’s available for private events. Arizona State University’s Thunderbird School of Global Management is also within walking distance of the Cambria.

Hotel amenities include The Rooftop Bar & Lounge which offers views across the city and can accommodate 499 guests. There is a rooftop pool, artwork from local artists in guest rooms and public areas, and a stunning mural on the building’s exterior. Signature restaurant Poppy is overseen by executive chef Nate Cayer and serves locally inspired dishes and craft beer.

The hotel is a ten-minute drive from Phoenix Sky Harbor Airport or a $2 trip on the city’s new Valley Metro Rail link.