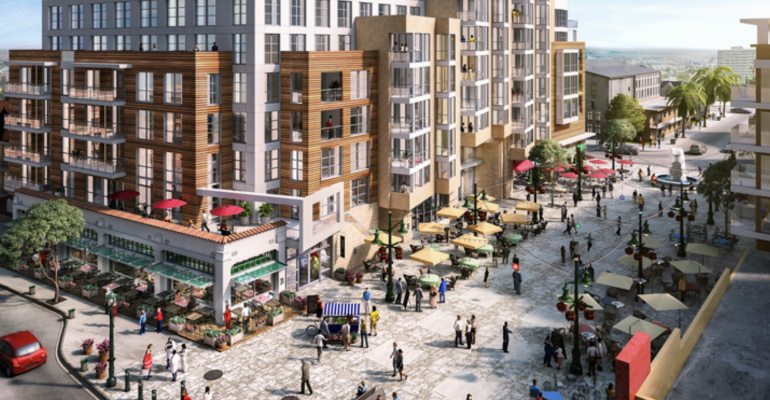 The Piazza della Famiglia has built-in amenities including lighting, audio, and Wi-Fi for off-site events near the convention center.

San Diego has a new outdoor venue for hire for meetings and events. The Piazza della Famiglia is a plaza featuring 7,400 square feet of usable event space in the city’s Little Italy neighborhood. The venue has views of San Diego Bay and a 625-square-foot three-tiered cascading fountain at one end. At just over a mile from the San Diego Convention Center, the venue is convenient for off-site dinners, receptions, and awards celebrations.

Originally opened to the public in March 2018, the space became available for hire this summer. It has an overhead lighting rig and programmable fountain lights, free Wi-Fi, an audio system, and restrooms. The Piazza has an alcohol license so guests can drink outdoors, and it’s located next to some of San Diego’s biggest food destinations: Frost Me, owned by “Cupcake Wars” winner Audrey Hermes; Farmer’s Table, a farm-to-fork restaurant; and the Little Italy Food Hall, featuring six different eateries.

Piazza della Famiglia is also close to the San Diego Zoo and the USS Midway Museum, and is 2.5 miles from San Diego International Airport.