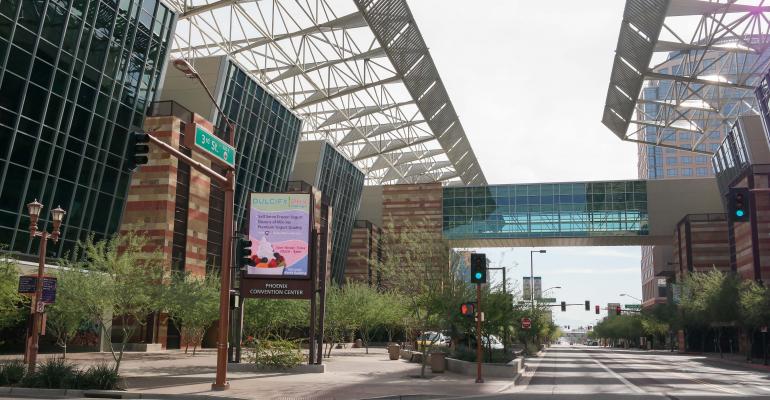 The Phoenix Convention Center has an opportunity to add retail and entertainment to the well-located 143,000-square-foot South Hall.

The Phoenix Convention Center is in an interesting position. Unlike most downtown meeting facilities that are unable to expand in the same location, Phoenix has an extra exhibition hall which is currently used for mostly smaller, local events and which the city is considering transforming and expanding upward.

The 143,000-square-foot South Hall was originally intended to be linked to the newer North Building with a tunnel or pedestrian walkway, but those plans were shelved after the two new convention center buildings were completed, the North and West Halls. The nine-acre site features its own 6,000-square-foot stage with VIP rooms and a full kitchen, and is in a prime location opposite Chase Field, the home of the Arizona Diamondbacks. The city has held several public meetings to collect ideas for the space, including allowing developers to buy the building or keeping the meeting facility and adding retail or entertainment options.

The move comes hot on the heels of the opening of Canyon on Third, a new 80,000-square-foot outdoor space encompassing Third Street between the convention center’s North and West Halls. The venue is partially shaded and within walking distance of downtown Phoenix’s restaurants and two other center-run venues, the newly-renovated 1,364-seat Orpheum Theater, LINK https://www.meetingsnet.com/destination-venue-news/phoenix-offers-meeting-planners-history-art-and-phantom-cat  and the 2,312-seat Symphony Hall.