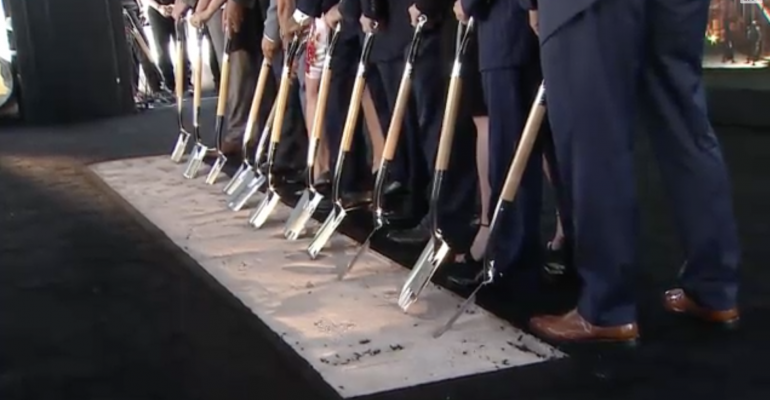 The celebration was live-streamed to more than 7,000 viewers as USTA’s Roger Dow hosted the event.

Caesars Entertainment held a groundbreaking celebration today to mark the beginning of construction on a 300,000-square-foot conference center in Las Vegas. The event featured two videos showing renderings of the new facility, Caesars Forum, and comments from President and CEO of Caesars Entertainment Mark Frissora and Clark County Commissioner Chris Giunchiglia. MC Roger Dow, president and CEO of the U.S. Travel Association, called the event, held in a tent in front of a giant video screen, a testament to the importance of the meetings industry to Las Vegas that so many people were prepared to sit, “in a parking lot in 100-degree heat,” to celebrate the groundbreaking. The ceremony also was live-streamed to more than 7,000 viewers online.

Dow described how he first came to Las Vegas more than 40 years ago and stayed at Caesars for a conference when the industry was in its infancy, but noted that now it is worth more $330 billion a year and is bigger than the automobile and fashion industries. Mark Frissora echoed his sentiments, saying that the investment in the conference center will nurture the entertainment industry in Las Vegas and announced that Caesars already has $70 million worth of contracted business for the conference center even though construction has not yet begun.

Chris Giunchiglia, known locally as Chris G., announced that the project will generate more than 1,000 construction jobs and 450 permanent jobs, and said that she was especially proud that it will use clean energy when it opens in 2020.

Caesars Forum will feature two, 108,000-square-foot pillarless ballrooms, the largest in the world, and will have direct access internally or via pedestrian walkways to 8,500 hotel rooms at Harrah’s Las Vegas, The LINQ Hotel, and Flamingo Las Vegas. The center will have an outdoor event space, Caesars Plaza, and will be able to host more than 10,000 event attendees.