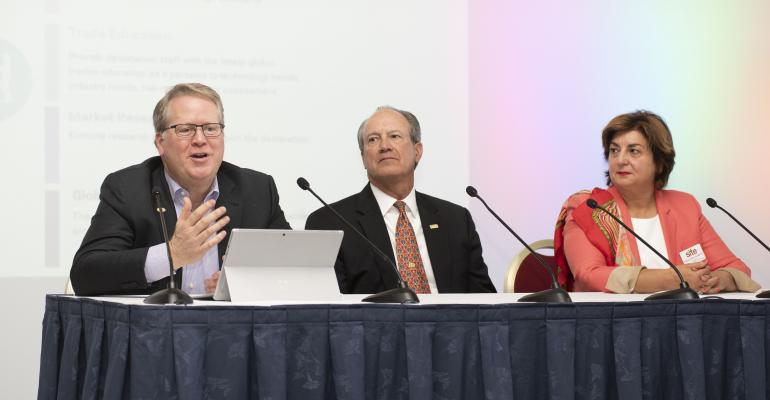 IAEE, SITE, and MPI aim to boost the economic benefits of the industry in Asia, Africa, and South America.

At last week’s IMEX America press conference, representatives from the Society for Incentive Travel Excellence, Meeting Professionals International, and the International Association of Exhibitions and Events announced a collaboration to boost the meetings and events industry in three underdeveloped markets: Asia, Africa, and South America.

The announcement was made by Paul Van Deventer, president and CEO at MPI; David DuBois, president and CEO of IAEE; and SITE president Annamaria Ruffini. “More regions and cities are recognizing the crucial part MICE plays in the world," Ruffini said. "That’s why we have joined forces to offer advice on the best industry practices for emerging regions.” She added that SITE was already working with local chapters to research professional areas where education was most needed. Van Deventer noted that the immediate focus would be on training in core competencies for event professionals and that the organizations have formed a working group that will collaborate on creating education initiatives that will include live, on-demand, and virtual training opportunities. According to Van Deventer, the three regions were chosen because, while tourism is already boosting economies in those areas, the meetings, events, and incentives industry is not living up to its economic potential.

Although no specific initiatives were announced at the press conference, Van Deventer suggested that “opportunity will follow the market needs and demands,” and also said that the collaboration includes an intention for the three groups to strengthen their North American memberships with cross-organizational benefits.

The agreement does not require a financial investment from the groups and there will be a charge for services, but Van Deventer confirmed, “The intention is not to make this collaboration for-profit but we will need to break even.” SITE Foundation President John Iannini added, “We have a lot of work to do, but it is good work.”