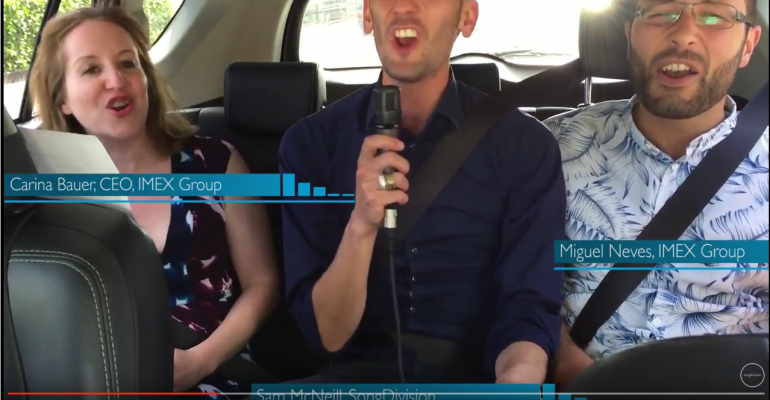 Car Karaoke Coming to the Strip for IMEX America

Late Late Show host James Cordon’s carpool karaoke segments with pop stars are pretty hilarious—check out these examples of him riffing with the likes of Adele and the Biebs. But who needs pop stars when the meetings industry is chock-full of its own stars?

Or so thinks experiential music agency SongDivision, which will be doing its own version of back-seat karaoke during IMEX America in just a few short weeks in Las Vegas. The plan is to lure some industry luminaries into the back seat of a car (you can register to participate if you dare!) and interview them about their experience at IMEX, then have them sing the Global Meetings Industry Day Anthem (if you haven’t heard it yet, check it out). In-demand Australian emcee and SongDivision’s UK and Europe General Manager Sam McNeill will be leading the festivities.

While they may not have quite the vocal chops of an Adele, McNeill, along with IMEX’s CEO Carina Bauer, Michael Neves, IMEX’s director of digital marketing, give us a preview:

You have to admit, that looks pretty fun! SongDivision will post some highlights on its Facebook page during IMEX, and clips of the GMID Anthem will be released on social media to further promote Global Meetings Industry Day 2017. On GMID, to be held April 6, 2017, a video featuring IMEX America participants getting down while getting around will be available to those holding events to celebrate the industry.

Hey, this could be your big break! Or at least a small break from the show floor...