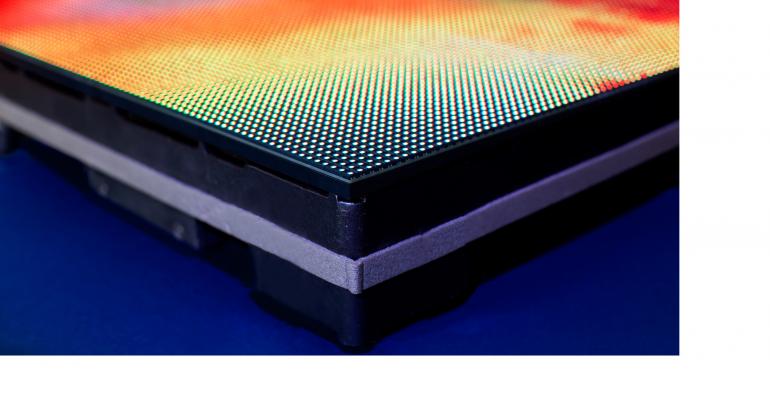 Plus, advice on the quality of LED screen that’s right for you.

Challenge: Perhaps the biggest change in meeting and event AV technology is the expanded use of livestreaming to deliver content to remote participants. “The big question now is, how do you create an event that is as memorable for the live attendees as it is for those watching a webstream at home?” asks Josh Weisberg, president of Navolo Audio-Video.
Solution: One answer is replacing traditional large-screen projection setups with LED panels offering a super-saturated video appearance that looks great in the room and remotely online. “LED is the way producers want to go because it looks good live, but boy oh boy does it looks good on a webstream—it's like looking at a video game,” Weisberg observes.

Challenge: Dealing with in-room and on-stage lighting that washes out the picture on a traditional projection screen.
Solution: Weisberg explains that “you can make the LED screen as bright as you possibly need to, or even brighter than you need to. You’re typically using only 20 percent or 30 percent of the display’s brightness with LED, and that gives lighting designers a huge amount of freedom in terms of how they're going to light.”

Challenge: Designing a dynamic set that engages live attendees as well as the livestream audience.
Solution: LED panels are flexible and can be hung in a variety of shapes and configurations. They can also be lifted, rotated, or tilted for kinetic effects with motorized lifts. And more surfaces are becoming screens, too, partly in the interest of making the images more memorable for the livestream audience. Consider the possibilities of, for example, putting LEDs on the stage floor, suggests Weisberg. “If you have imagery and media on the floor as well as the backdrop, as the presenter moves about, you can change the media on the floor to enhance the message. And if you have a camera above, you can have an aerial view and get incredible perspective shots.”

The literal flexibility of LED displays is also changing production design. Large-scale meetings are exploring two-sided and curved LED displays, hung in the center of large rooms and arenas for optimal viewing from all heights and angles.

Advice: More Isn’t Always Better
Rich Tate, director of show services with LMG, recently helped a major client make the switch from projection to LED for an annual 18,000-person meeting. He has some advice to share on pixel pitch, which describes the density of the pixels on an LED display. Most planners would think that a tighter pixel pitch is the best, as the screen will be crammed with more LEDs to boost brightness and increase resolution. However, the truth is that for audiences that are seated 30 to 50 feet from a screen, there might be more drawbacks than advantages to going from, say, a 2 mm pixel pitch to a 5 mm or 8 mm pixel pitch.

“We have a lot of discussions with clients about it,” Tate says. “If you go with a 2-millimeter product, you're going to basically triple the pixels you're trying to deliver. So, we’re going to have to add more processing and more media servers to deliver that. If you go with 5 millimeters, you'll still be blown away by how good it looks and it's going to simplify the process.”