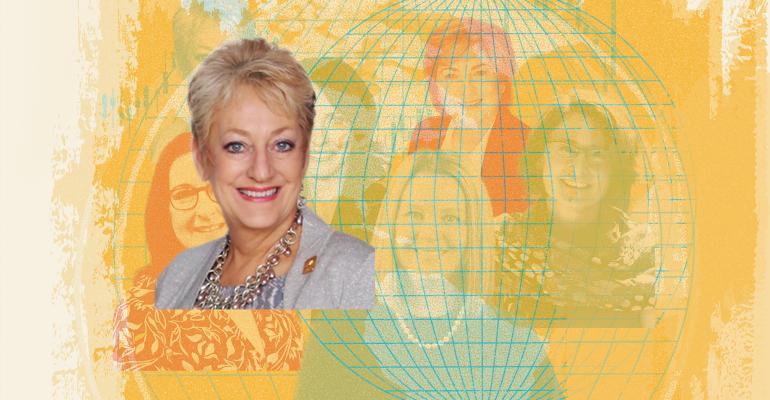 A pitch-perfect approach to advancing associations.

Her take on the industry: Patricia Blake thinks she’d make a terrible meeting planner. In fact, she knows it. The incoming chair of ASAE started her career four decades ago in a meeting planning role for the Society of Manufacturing Engineers. “I knew immediately that I loved the association world, but I definitely wasn’t good at being a meeting planner,” recalls Blake, who notes that although she is well-organized, she “never could nail the details” as well as some of her colleagues could. Still, she moved up professionally—most recently serving for 17 years as the CEO of the American Society for Gastrointestinal Endoscopy, where she helped grow the organization from 8,000 to 15,000 members. Blake says she has “tremendous respect” for meeting professionals and has always been interested in the role meetings and conventions play in advancing associations.

There’s no doubt 2019 is going to be a transformative year for Blake. Not only is she going to serve at the helm of ASAE, but she’s moved from her longtime home in Illinois to Washington, D.C., where she will become CEO for the Heart Rhythm Society in March. “It’s going to be quite a year,” she predicts. “I’m experiencing a new job, a new chairmanship, and the culture shock of living in a new city all at one time.”

We need to do a better job educating people starting in grade school about the power of associations.

Although much of her life is in flux, as a 40-year association veteran, Blake is highly focused on three key goals as chairman of ASAE. One goal is to educate more young people. “We need to do a better job educating people starting in grade school about the power of associations and how they can be great career options,” she says. Blake also wants to help ASAE continue its commitment to helping associations across the country to recruit a more diverse and inclusive membership.

In her new position with ASAE, Blake also hopes to push its members to continue to leverage face-to-face meetings. “Sometimes people are mistaken in thinking that Millennials like technology because they want to meet up via social media or some other virtual way,” she says. “They certainly want to do that, but they want to meet face to face as well. Technology is adding to our meeting options, not subtracting from them.”

As someone who started her career when there were few women in association leadership, Blake has plenty of advice for young women who are working their way up the ladder now. “I always felt, even when the notion wasn’t popular, that it’s important to unapologetically be a woman,” she says. “Women have wonderful qualities and traits, like intuition, that they might not have touted years ago for fear of seeming too feminine,” she says. “I was never like that. I tell both men and women, ‘Don’t be shy about what you’re good at. You should never abandon your strengths and try to be someone else.’”

Fun Fact: “Raised on a dairy farm in southeastern Michigan, Blake aspired to perform in musical theater on Broadway. After milking more than 100 cows with her dad each morning on the farm, she says she would practice her singing for her cow Pixie. “Pretty soon, the other cows would come around and form a semicircle around me to listen,” she says. “Cows are very curious, so I had a wonderful audience.’”