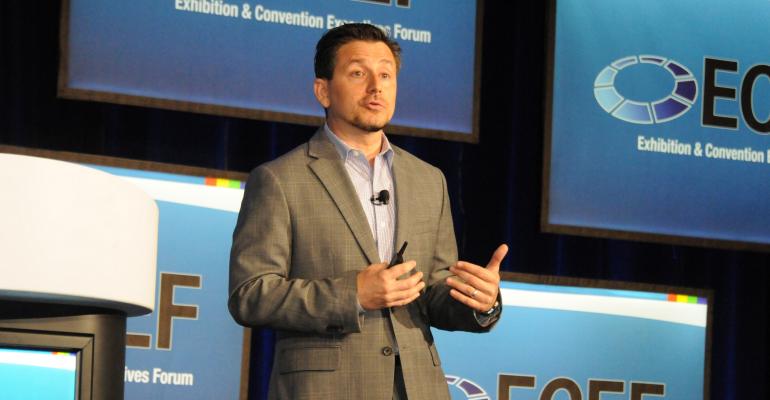 Warning to Trade Show Producers: Be Kind to Your Exhibitors

Pay attention to your "disrupters"

What’s the key to trade show success? Recognize your “disrupters” and turn your attendees into fans. Those were the core messages from Greg Topalian, Reed Exhibitions’ senior vice president, who delivered a keynote address to the largest-ever audience at the Exhibition and Convention Executives Forum, organized by Lippman Connects, on May 29, at the JW Marriott in Washington, D.C.

Topalian, the brains behind ReedPop, the fastest-growing division in Reed’s North American events portfolio (RXNA), warned that the business-to-business event model was ripe for disruption. ReedPop, which includes New York’s Comic Con, makes up 15 percent of RXNA’s revenues and in 2013 the division’s shows drew over 500,000 fans.

“How do you identify the disrupters? Those are the things to be scared of, the things that make you uncomfortable,” said Topalian.

The key to success is turning your event’s disrupters into opportunities, he added.

His cautionary tale: Blockbuster Video, which rose to success in the 1980s only to lose all market share to Netflix by 2010. “Business was good, so what changed? Blockbuster made huge profits from its late fees, but missed that consumer habits were changing, and missed the impact of streaming video,” said Topalian. Not grasping that late fees were incredibly annoying to its customers became Blockbuster’s biggest disrupter, he added.

So, he asked the audience of senior event producers: “What is our ‘late fee?’ What are our potential disrupters? How can we turn them into opportunities?”

He suggested that the way trade show organizers manage the exhibitor’s experience, which is “complicated and expensive, could be our industry’s ‘late fee.’ Imagine if Amazon put us through that?” he asked.

For a trade show to be a success, Topalian offered three big ideas:

Build a fan-like loyalty among your attendees to ward off disruptions. “Your attendees are getting younger, so understand and use social media as you learn how your audience consumes,” he said. Today’s event is “more about community and engagement” than the building or physical space, he added. “Treat your audience like a community, not a database.” Some suggestions: give them unique content, experiences, and access they can’t get anywhere else.

Deliver an “E2E” or end-to-end consumer experience. This means understanding the shift toward direct-to-consumer sales, and recognizing it within your market. Across industries there’s a move to cut out the middleman: Redfin in real estate, Uber in transportation, Airbnb in travel, and Warby Parker in the optical market, to name a few companies changing consumer behavior. “Understand how the key players in the transactions in your marketplaces are changing, and how that might disrupt your industry,” said Topalian.

Make your exhibitors’ lives easier. “It’s up to you to create the experience,” he said. “Don’t put it on your exhibitor to do that.”

Now in its 13th year, ECEF attracted a record 206 senior executives from associations and independent event producers for a day full of informational sessions and networking opportunities.

Beyond “Dumb” Internet: Get Ready for the Really Cool Networked Event
Apr 14, 2014

5 Things that Keep Medical Meeting Managers Up at Night
Apr 24, 2014