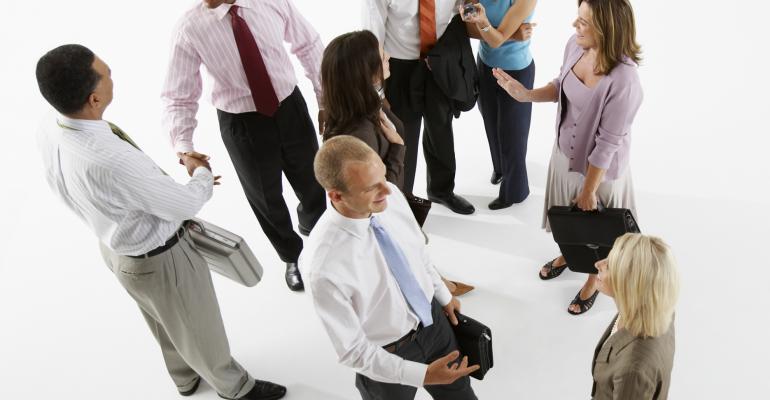 Ever considered a "networking concierge"? Learn about that and 9 other interesting ideas that will get your attendees talking.

At the Global AgInvesting conference, event organizers don't leave networking to chance. To help make connections between investors and agribusiness executives, a “networking facilitator” is on hand at registration, coffee breaks, and other times. Anyone who wants assistance in meeting a fellow attendee from a particular company, or even a certain type of company, can ask the facilitator to assist with an introduction. The organization has found this approach to be quite effective for nearly a decade now.

Sharon Fisher, founder and “idea sparker” for Orlando-based Play with a Purpose, shares the following mix of creative, low-cost, conversation-inducing ideas. A few big messages: facilitate networking from the very start of the meeting; promote a fun atmosphere; and nametags are underused real estate.

• DYI Nametags
Set out markers, stickers, bling, etc., and let attendees loose at a make-your-own nametag station. Also ask attendees to write what they are hoping to take away from the conference on the back of their badge, as a reminder. The custom badges are great conversation starters, says Fisher, and the stations are an easy sponsorship sell because the sponsor gets a chance to chat with attendees as they creat their design.

• Focus the First-Timer’s Reception on the First-Timers
Many organizations use a first-timer’s reception to introduce the board or other senior executives. But Fisher believes the time is better spent talking about how newcomers can make the most of the meeting and finding ways to introduce people to one another. One simple game she suggests is “Commonalities,” in which attendees are split into small groups and asked to come up with things they all have in common (biology degrees? cats? difficult bosses? size 8 feet?). The group with the most commonalities is the winner. “It creates a circle of friends among the newcomers who now know a few things they have in common,” Fisher says.

• Can You Fly?
When Fisher registered for a mid-sized event a few years back, she was asked to submit a made-up name for her “alter-ego superhero.” When she arrived at the conference, “Springboard Shazam” was the only name on her badge. For the first two hours of the conference, attendees wore their whimsical nametags, giving them an instant conversation hook. “It started the conference with a great tone,” Fisher says.

• Huddle Up
Assign attendees to “huddles” of about 10 people each. The huddles meet for the first time at the opening session and regroup at the end of the day to discuss what they got out of the sessions, or a more specific pre-assigned topic, or to simply have a drink together. It’s a “forced reason to talk to people,” says Fisher, which some people need and appreciate.

• A Networking Minute
Fisher shares this statistic: Attendees who meet 10 people in the first two hours of a meeting are 80 percent more likely to come back to the next meeting. With that in mind, she suggests an easy and quick networking exercise at the first general session: Attendees turn to the person next to them, and together they spend one minute explaining their favorite apps, or their favorite vacation spots, or what they want to get out of the meeting, or whatever else you ask them to discuss.

• The Great Conversation Wall
Set up a large wall that can be written on, and title it with a question for attendees to respond to. (If you provide markers, the answers will be easier to read.) “It’s a great, natural networking area—something to draw attendees’ attention to something other than their phones,” Fisher said. She noted that TED conferences have used this idea, asking attendees to complete the phrase “Before I die, I want to...” Fisher suggests another use for a write-on wall: Designate it as a place where people can write who they are looking for at the conference (specifically or generally).

• The Elevator Speech
One of Fisher's colleagues has an exercise that works for her 60-person meeting: At the start of the event, the group takes a half-hour to allow each person to stand up and speak for 30 seconds on what they do and the kinds of people they want to meet at the event. That session is immediately followed by a networking reception, allowing attendees to make promising connections.

• I Can Help You With…
Fisher describes a similar idea that might work better for introverts: Name badges with two cards fastened to the top that identify attendee’s strengths and goals. On one card, attendees complete the phrase “I can help you with...” (listed on the card as "ICHYW") and on the other card, attednees complete the phrase “I would like to learn...” (listed as "IWLTL").

• Rock, Paper, Scissors
Sometimes the best thing you can do to encourage conversation is to get everyone loosened up and smiling. Another of Fisher's colleagues shares a winning idea she uses for a group of techies: a rock-paper-scissors championship to lead off a networking reception. To start, everyone pairs up and plays a quick best-of-three game. The loser is now on the winner’s “team,” and the winner finds another winner to challenge. If that person wins again, everyone on the loser’s team joins his team. Pretty soon, there are only two players left and everyone in the room is on one team or another.

Site Inspections So Great They Won the Business
Mar 09, 2015