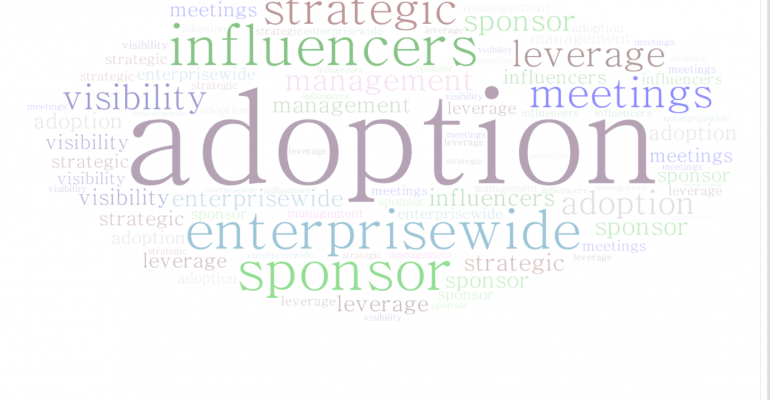 A Vocabulary Lesson for SMM Newbies

If you’re just diving into strategic meetings management, learning the lingo is a good place to start. This six-word glossary covers the essentials.

During a recent presentation about strategic meetings management, I was asked for a list of useful vocabulary. It occurred to me that I had never developed one, so I was inspired to create a short glossary of six useful SMM terms:

Adoption: The degree of acceptance and participation in the SMM program. All SMMPs have target adoption rates. The goal for the first year may be to get visibility into 50 percent of the company’s contracted meetings; year two 75 percent, and year three up to 95 percent.

Enterprisewide: SMM is designed to capture meeting and event spend through the entire company or “enterprise.” Some programs may start with capturing just one or two regions or business units, but ultimately the entire spend for the entity should be controlled.

Influencers: People who have a positive or negative opinion of the SMM program. Both need to be considered. You’ll want to address the concerns of negative influencers in order to win them over, and fully engage the positive influencers so they will help to gain additional buy-in for your program.

Leverage: SMM programs provide detailed data into hotel use on the group side of the business. When combined with business travel spend, companies can be even more effective in gaining better concessions and rates by bundling the total global spend for a hotel or hotel brand.

Sponsor: A hallmark of most successful SMM programs is the support of an executive sponsor. This sponsor is usually the leader of the organization where the SMM resides, such as procurement, or event marketing. Thus, the executive sponsor will be a chief procurement officer or chief marketing officer. Having this top-down influence from leadership helps drive program adoption.

Visibility: The visibility that SMM programs provide into the meeting and event spend allows organizations to understand their volume with individual hotels and hotel brands. This insight into spend data results in a more powerful position during hotel negotiations.