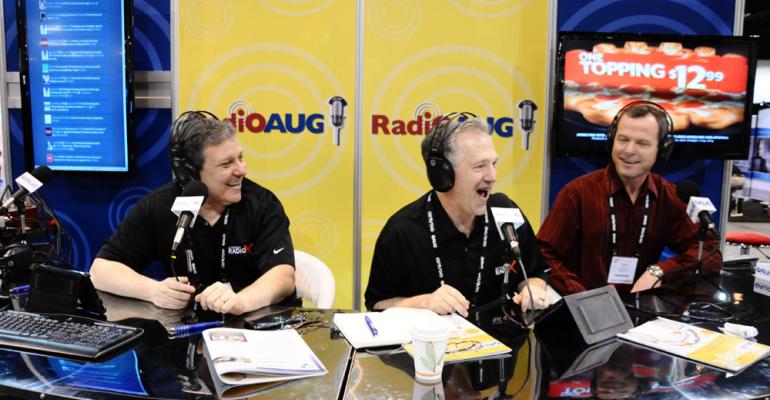 <p> </p> <p>OAUG&rsquo;s radio hosts Lee Kantor (left) and Stone Payton (center) have some fun with a guest in the RadiOAUG booth during COLLABORATE 13. </p>
Association Conventions and Expos>Sponsorships

When the Oracle Applications Users Group decided it wanted to draw attention to its educational and advocacy mission during its annual conference—COLLABORATE 13: Technology and Applications Forum for the Oracle Community—Christine Hilgert, CMP, got the call. Hilgert, vice president, Meeting Expectations, Atlanta, has been managing OAUG’s events for the past 16 years, and she knows that creativity—and sometimes the unexpected—is needed to stand out on the COLLABORATE show floor.

What came to mind for Hilgert was another Atlanta-based company, Business RadioX, which produces business-to-business talk radio shows on everything from “Disruptive Healthcare” to “Real Estate Atlanta.” Her idea: Produce a custom Internet radio show right from the OAUG booth. If you want attendees to hear your message, thought Hilgert, why not broadcast it? Literally.

OAUG, which co-hosts the 7,000-attendee conference with the Independent Oracle Users Group and Quest International Users Group, gave the idea the green light. To compete for attention with more than 1,000 educational sessions and 270 exhibiting companies, a booth has to wow. And there was an added benefit: Interview slots could be sold to sponsors to offset the cost of the new radio-show booth.

The concept was launched in mid-January 2013, giving the Meeting Expectations team 12 weeks to get ready for the April 7–11 show at Denver’s Colorado Convention Center. They had four major priorities to get RadiOAUG off the ground:

The booth. On one end of the 30-foot-by-40-foot booth, a curved anchor desk was built for the radio hosts. It was outfitted with several microphones and two plasma-screen televisions showcasing the schedule of interviews, a Twitter stream, conference updates, and live CNN news segments. On the other end of the booth, lounge furniture welcomed attendees to listen and network, and a check-in counter provided a place for people to meet with staff and collect OAUG materials. Over the booth hung a large, circular RadiOAUG banner drawing attendees’ attention.

The talent. Hilgert hired anchor duo Stone Payton and Lee Kantor, who host a Business RadioX show focused on top performers across industries. Their talent, she explains, was in making everyone feel at ease and getting guests’ messages across. A Business RadioX off-air producer was also behind the anchor desk in charge of the technical side of the broadcast, and a live musician was hired to play in the booth during breaks between the radio segments.

The guests. Hilgert had close to 40 15-minute interview slots to fill over the three days of the exhibition. She reached out, on one hand, to OAUG members, Oracle representatives, and industry experts for on-air discussions about the association and industry issues. She also worked with show sponsors who, for a fee, could be interviewed about their products and services. (For COLLABORATE 14, sponsors will pay $2,200 for an interview slot on RadiOAUG.) All who were interviewed received .wav file recordings of their interviews.

The marketing. OAUG promoted its booth on its COLLABORATE 13 Web site, in the printed program, on posters in the convention center hallways, and in a conference bag insert.

COLLABORATE 13 attendees could listen to the broadcast live in the booth or by streaming it through their mobile devices by linking to a custom URL set up by Business RadioX. OAUG also broadcast the interviews from kiosks in the hallways outside the educational sessions.

The goals for the COLLABORATE 13 booth were to attract 1,500 visitors (they beat that by 20 percent with 1,876 visitors); increase Twitter activity (they had 478 tweets about the booth); and sell 10 sponsorships (they sold 16). Enthusiasm for the RadiOAUG concept led to OAUG’s first-ever booth at Oracle OpenWorld in September. While user groups attending Oracle’s mega-event in San Francisco are always given small kiosks on the periphery of the show floor, OAUG decided on a more high-profile approach this year, investing in a 10-foot-by-10-foot booth with RadiOAUG to engage attendees.

The success of the OpenWorld venture surprised even Hilgert. Not only were membership leads way up over the previous year—354 compared to 232—but revenues were significant. She hadn’t had time to pre-sell sponsor interviews but ended up with 20. Exhibitors, eager to get their messages out, were writing checks on the show floor for a chance to be interviewed by Stone and Lee.