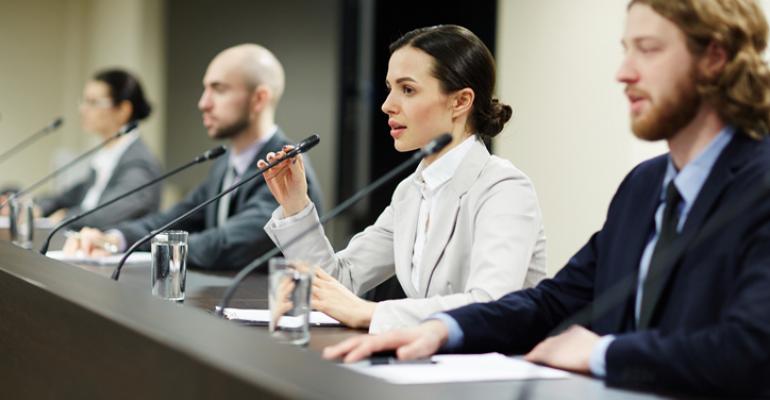 Study Finds One in Four Tech-Conference Speakers Are Women

It’s always the woman’s restrooms that have the long lines, right? Well, there’s at least one place where that rule doesn’t hold up: technology conferences, where men tend to drastically outnumber women. And it was a desolate restroom at a tech event in 2017 that became the spark for a new research report by Ensono, an IT services provider, that looks at the gender gap in featured speakers and panelists, and other women’s issues at meetings.

Ensono surveyed 500 women across the U.S. and U.K. who had attended a tech conference to ask about their experiences, and also audited the speaker lineups from 18 major technology conferences from 2016 to 2018 to determine the ratio of women to men. Here are some of the findings from “Speak Up: Bringing More Women’s Voices to Tech Conferences”:

• Women, on average, make up 25 percent of all keynote or stand-alone speakers at tech conferences. That figure, the report says, speaks to the tech industry’s larger gender issues, citing an estimate that only 20 percent of tech job are held by women. Nevertheless, the report notes some progress: a 4 percent increase in the number of female speakers at tech conferences from 2016 to 2018.

• Seventy percent of respondents who had sat on a panel at a tech conference report being the only woman on the panel.

• Codes of conduct that outline acceptable conference behavior have become more common, the report states. However, making the codes visible to attendees and effective is a bigger challenge. The report says that 49 percent of the respondents were unclear about the existence of a code of conduct at the conferences they attend.

• One in four respondents had experienced sexual harassment at a tech conference.

• More than two in five respondents report they had an experience at a tech conference that makes it less likely they will attend in the future.

The report also outlines a number of recommendations for supporting employees who want to speak at meetings:
• Encourage the marketing department to promote upcoming speaking opportunities internally
• Celebrate employees who present at events
• Fund public-speaking training
• Create a mentorship program to encourage women speakers
• Allow employees to set aside time to prepare for conferences
• Pay for materials needed to present at conferences.

Social Responsibility at Events, Up Close and Personal
Jan 17, 2020

Read This Before Booking Your Next Speaker
Jan 02, 2020