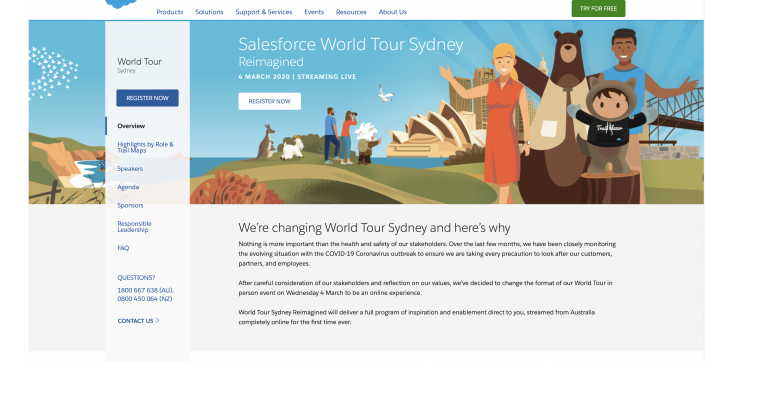 What’s the Deadline for an Event to Go Virtual?

Tech firm Salesforce just shifted its biggest Australian conference to an online event—on less than three weeks’ notice. For events with exhibitors, though, a bit more time is needed to make it work.

Just 15 days ahead of its 2020 World Tour Sydney event in Australia that was expected to draw more than 20,000 attendees from across the Asia-Pacific region, cloud-based CRM software firm Salesforce announced that the conference will still take place on March 4 but in an online-only format to alleviate participant fears of coronavirus. The company released a statement saying the format change was made “after careful consideration of our stakeholders and reflection upon our values.” The statement also noted that the online program would be “equally as valuable” as the in-person version would have been.

One week earlier, another high-tech firm, Cisco Systems, canceled its upcoming Australian event, the 8,500-attendee Cisco Live Melbourne conference scheduled for March 3-6, due to coronavirus concerns. Cisco will not create an online version of the event to take place over the original dates of the gathering.

Shifting a large conference from the physical to digital realm in less than three weeks is a very tall order that perhaps only a large technology company could pull off, according to Curtis O’Keefe, executive vice president of Communique Conferencing Inc., a virtual events company based in Bethesda, Md. In his experience, four weeks is about the fastest a digital transition can be accomplished, especially when an exhibit component is involved.

On the other hand, a host organization might be able to preserve nearly all of its exhibit revenue even if an event moves online. O’Keefe cites three selling points planners can make to exhibitors. First, “you will get far more attendees than an in-person event because there’s no travel involved.” Second, “exhibitors are going to get far more data than they ever would at a physical event. Imagine someone walking next to each attendee and writing down everything they do; we can track every booth they stopped at, every bit of booth content they viewed, every conference session they attended, and how long they did it for. While face-to-face contact will always be necessary, the kind of data a virtual event can capture is incredibly helpful for both exhibitors and the meeting host to further their relationship with each attendee.”

The third benefit in the virtual realm is that “the event lives on for longer than just the few days that an in-person event would,” O’Keefe says. “Many organizations make all their event elements accessible online for 30 to 60 days, while some will keep it up for six or even 12 months. This way, people can return and consume more educational sessions and exhibitor content.”

Lastly, the biggest danger to the success of an online event that temporarily replaces an in-person conference is that “some event organizers tend to think it’s not much different from setting up a series of webinars,” O”Keefe says. “But there is a whole system behind the event that has to be populated by the conference organizer, the presenters, and the exhibitors. There is a lot to think about. However, if you get the communications out to all parties about when materials must be uploaded and how to access the tutorials for doing that, the process can go pretty smoothly.”