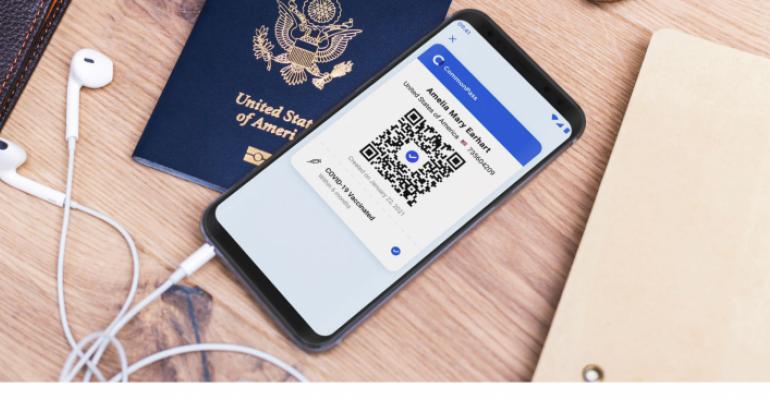 Digital apps that verify an individual’s Covid-19 status are gaining adopters and making progress. Here are six in the news.

Digital health-verification programs, sometimes called vaccination passports, are seeing strong support among business travel managers and their supplier partners. A survey last week by the Global Business Travel Association found that two-thirds of the 680 respondents believe government-issued vaccine passports confirming the bearer has been vaccinated against Covid-19 is “a good policy.”

Only 11 percent of GBTA’s survey respondents thought it was a bad policy, with privacy being their primary concern. The other respondents were either indifferent to the concept or didn’t know enough about digital health verification to have an opinion. Europeans were more likely than North Americans to say that issuing vaccination passports is a good policy (72 percent versus 63 percent).

A slew of verification tools—among them CommonPass, Health Pass by Clear, Travel Pass, the EU’s Digital Green Certificate, VeriFLY, and the IBM Digital Health Pass—are being used, tested, or researched in an effort to open up travel and eliminate the need for mandated quarantines and multiple tests. Here’s a roundup of recent developments.

CommonPass: Developed by The Commons Project Foundation and the World Economic Forum, the first CommonPass trials were run by Cathay Pacific Airways and United Airlines on select routes last fall. Qantas is currently testing it between Frankfurt and Darwin while JetBlue started using it this week for Aruba passengers. Virgin and Lufthansa are expected to run trials soon.

Health Pass by Clear: Clear is familiar to travelers as a trusted-traveler program that helps people get through airport security more quickly. Its new Health Pass has a pilot program in the works with the state of Hawaii. In early March, Clear partnered with The Commons Project Foundation allowing Health Pass to use the CommonPass platform to collect and manage lab results and vaccination records from health-data sources.

This week, Walmart announced that it was partnering with CommonPass and Health Pass so that customers who get vaccinated at Walmart and Sam’s Club locations can share their vaccination status with those apps.

Travel Pass: The International Air Transport Association’s travel passport, Travel Pass, began its first trial this week on Qatar Airways flights from Doha, Qatar, to Istanbul, Turkey. Travel Pass is expected to officially launch at the end of March with support from Emirates, Singapore Airlines, and Qantas, among other airlines.

Digital Green Certificate: This week the European Union unveiled a plan for “digital green certificates,” digital documents that would allow travel between the 27 EU countries. The digital certificate would provide evidence that the holder had either been vaccinated against Covid-19, recently tested negative, or acquired antibodies after recovering from the virus.

VeriFLY: British Airways, Alaska Airlines, and American Airlines have trialed this tool, and Hyatt Hotels announced in early March that it had “plans to explore” VeriFLY+ Stay, the version of the app optimized for the hotel industry, to help meeting and event planners put safety criteria in place.

IBM Digital Health Pass: The IBM app is being trialed by the state of New York and was used for an NBA game at Barclays Center in Brooklyn on February 27 and an NHL game at Madison Square Garden on March 2.