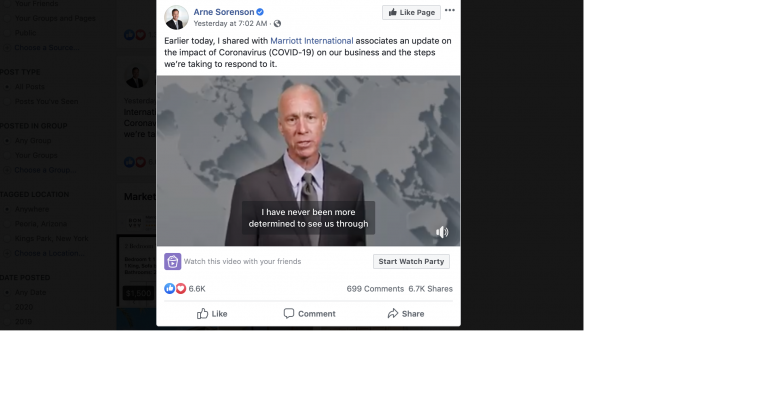 Leadership in a Crisis Moment

Marriott International CEO Arne Sorenson makes a video presentation to employees worldwide that outlines plans for conserving cash now, resuming business later, and supporting each other all the way through.

On the morning of March 19, Arne Sorenson—his head bald as a result of recent cancer treatments—stood in front of a camera at Marriott International’s headquarters in Bethesda, Md., and told the 175,000 employees of the firm that “this is most difficult video message we have ever pulled together.”

Over the next five and a half minutes, Sorenson discussed the company’s approach to managing its operations in the face of the global coronavirus pandemic. But he began and ended his presentation by focusing on the health and welfare of his fellow employees and their families. In between, Sorenson talked about the dire business landscape at the moment, with revenues at hotels in many parts of the world down by as much as 75 percent versus the same period last year.

In addition to what he said were “hundreds of property closures until such time that demand begins to return,” Sorenson detailed several other cost-saving measures: “At the property level, contingency plans vary by region, but for hotels that remain open they include closing food and beverage outlets, reducing staffs, and closing floors of the hotel. More details of these actions and what they mean will be shared by local HR teams.” Further, the company will stop all non-essential spending, freeze hiring, and cut pay for Marriott’s executive team by 50 percent. Sorenson himself will forgo taking any salary for the rest of 2020.

In a statement a day earlier, the company noted that “we are adjusting global operations accordingly, which has meant either reduction in hours or a temporary leave for many of our associates at our properties.” The furlough of what is likely to be tens of thousands of workers means that they won't be paid their salaries during their time away, but they will maintain their healthcare benefits. The hotel industry is presently seeking more than $50 billion from the federal government to tide companies over until the curve representing coronavirus infections flattens and the timetable for sufficient guest-room demand can be predicted.

Towards the end of his presentation, Sorenson became emotional, choking up as he acknowledged the effect this situation is having on his colleagues before making a commitment to them: “There is simply nothing worse than telling highly valued associates, the people who are the heart of this company, that their roles are being impacted by events completely outside their control. I have never been more determined to see us through than I am at this moment.”

The video can be found here.