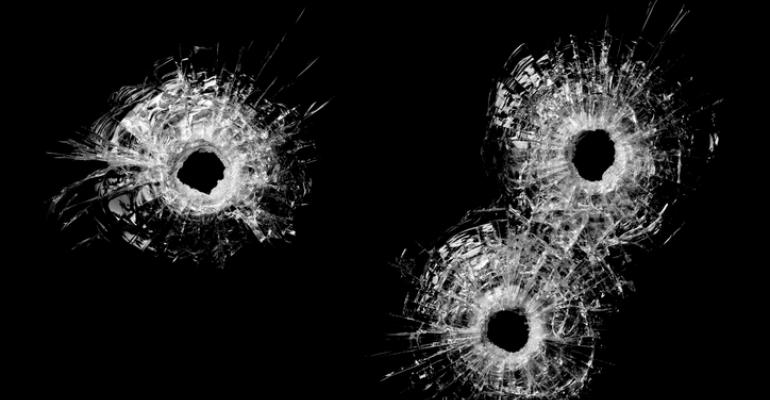 Carol Cambridge, CEO of The Stay Safe Project, shares her advice for reacting effectively if gunfire erupts at your event.

Carol Cambridge, CEO of The Stay Safe Project, starts off her seminars on active shooters with the sound of live gunfire and a mock evacuation. Not surprisingly, participants do everything wrong, including, she says, “almost 100 percent of the time” leaving behind attendees who are disabled.

After a debrief, they repeat the evacuation, so that participants can “learn the muscle memory that will come back to them in an emergency,” Cambridge says. Typically, it takes three to four minutes to evacuate 300 people from a room the first time; after a practice, it’s usually less than a minute.

“Having a drill, or just thinking about how you would respond in a situation and what is likely to happen, can help you prepare,” Cambridge says. “Most people after a drill say they did not expect to have to jump over chairs that were knocked over and other obstacles to get out of the room. Knowing where the exits are and planning the easiest way to get to them can save you time in an emergency.”

We asked Cambridge for more insights from her active-shooter training.

Typically, we are told that in the event of an active-shooter situation we should run, hide, and fight. What does that really mean?
We are told this because it is easy to remember in a panic situation.

Running is the most important defense. If you are in the line of fire, running in a zig-zag manner and crouching down while running will improve your chances. Many people think you should crawl along the ground but think about the target size of a six-foot man crawling versus crouching, you want to present the smallest possible target to a shooter.  Scatter as you run. A gunman will target large groups of people for maximum impact.

Hiding is also effective.  According to the FBI, 69 percent of active shooter situations are over in five minutes and 36 percent are over within two minutes, so silence your phone, be quiet, and shelter until law enforcement arrives. Be aware that only steel or concrete will stop a bullet so hiding behind a desk, for example, will not save you. Stay in the room and lock the door or block it if you can, but be aware that a shooter can fire through the door. Do not panic. I ask people what they would do if someone becomes hysterical and screams, possibly attracting the attention of the shooter. Someone in the group usually suggests knocking them out. How do you run with an unconscious person? Also, it is harder to do than you think. I advise people to take the panicked person by the arm and firmly give them specific instructions—“follow me” or “be silent”—and that is usually enough to handle the situation.

Fighting is your last resort. It is possible that you could surprise the shooter from behind and hit them with a fire extinguisher, but this is not a realistic scenario most of the time. A group of people attempting to tackle a gunman will only add to the casualties. A woman in one of my seminars said she had a concealed carry permit for her gun and would look for the shooter. I asked her if her kids were prepared to grow up without a mother. Do not go looking for the shooter, he or she is prepared for this situation, may be wearing body armor, and will probably have greater firepower. And if the SWAT team arrives they will consider any armed person a threat.

What should you do once law enforcement arrives?
You should understand that a SWAT team has one job and one job only: They are there to put down the shooter. They will step over injured people to do that, so if it is safe, be prepared to try to help the injured until medical aid arrives. Be careful coming out of your hiding places and don’t make any moves that the SWAT team might consider threatening, they may not have an accurate description of the shooter. Comply with all law enforcement instructions immediately.

Any other thoughts on active-shooter situations?
Remember that these situations are incredibly rare. But if you plan and prepare, you and your attendees will worry less and have a better meeting, and if you are faced with that situation, you will be able to act from a position of strength, not fear. There is no perfect response but there are a lot of bad ones, and that is why training is important so that you don’t panic or freeze.