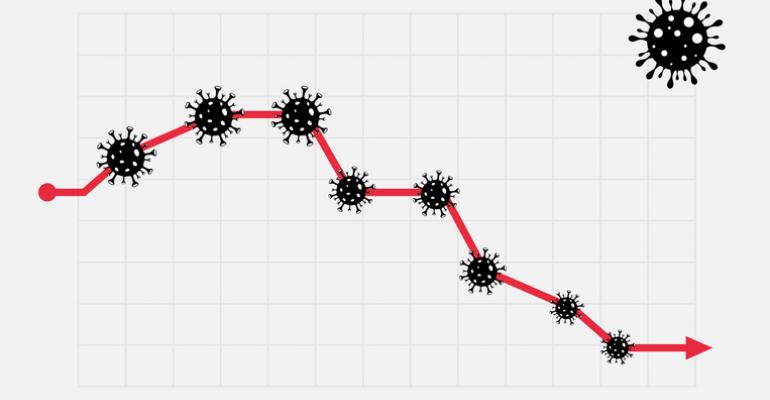 Covid case numbers have dropped dramatically, but the effect of that improvement on business-travel stats isn’t immediate.

The Global Business Travel Association has surveyed its members relentlessly over the course of the pandemic. Approximately monthly since February 2020, it has asked members—travel managers, sourcing professionals, travel management companies, and suppliers—to weigh in on how Covid 19 concerns and restrictions have affected travel at their companies. With mask mandates around the country now falling quickly, GBTA last week released the results of its 27th Coronavirus poll

Many of the survey results mirror the optimism of a positive pandemic trajectory—just 44,386 new cases were reported in the U.S. on March 6, a 57 percent drop since February 20—but there are also signs that back-to-business sentiments are uneven.
Here are five takeaways from GBTA’s February survey:

• A large majority of respondents want to get out on the road at least as often as they did pre-pandemic. While 30 percent would prefer to travel “less” or “much less,” 68 percent are hoping to travel as much or more than before. Two percent of the respondents aren’t sure.

• Many suppliers reported an increase in bookings in February. However, the upturn was nothing like the rush of business seen in summer 2021. Last July, 70 percent of suppliers (hotels, airlines, travel management companies, and ground transportation companies) reported an increase in bookings and another 27 percent said bookings had remained the same; only 3 percent reported a drop. In contrast, the booking numbers reported in February were modest (45 percent saw an increase, 20 percent stayed the same, and 35 percent decreased).

To read the full results of any of GBTA’s monthly polls tracking the impact of Covid-19 on the business travel environment, click here.