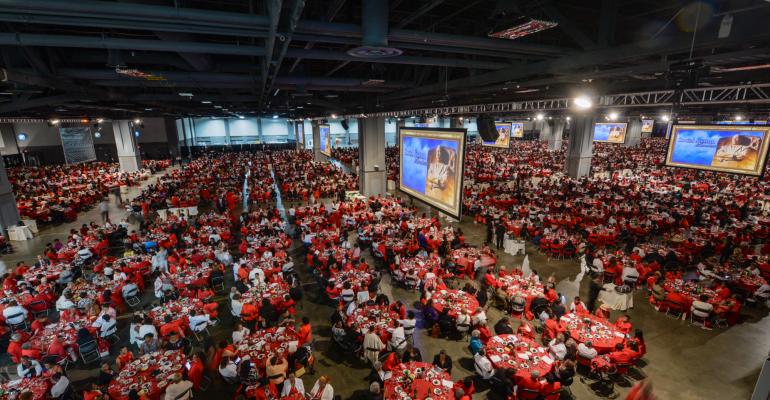 It didn’t quite set a record, but the 16,000-seat banquet for the Delta Sigma Theta Sorority Inc. biennial convention July 15 at the Walter E. Washington Convention Center in Washington, D.C., came pretty close. It was just one highlight of the biggest convention of the year in the nation’s capital—an event, the largest in the history of the 100-year-old sorority, that required some logistical gymnastics to accommodate 40,000 sorority sisters July 11–17.

The largest sit-down meal ever, according to Guinness World Records, took place in 2009 at the Walter E. Washington Convention Center where another sorority—Alpha Kappa Alpha—served a meal for 16,206 people.

Delta Sigma Theta came up a tad shy of the record with its meal for about 16,000 served on 1,600 tables in three contiguous halls in the convention center. The rest of the attendees were served at several different hotels and venues. Only a few hours earlier, those three convention center halls (and a few other venues for the overflow) had been set with 45,000 chairs in theater-style for a general session.

During the week, Centerplate/NBSE, the convention center’s catering partner, served 49,780 meals, used more than three miles of baking sheet pans, and had 42 refrigeration trucks on hand for storage. Food and beverage served during the event included 23,250 pounds of chicken breasts, more than eight tons of vegetables, 6,300 pounds of cheese, and 4,800 gallons of iced tea. Centerplate/NBSE used 139,000 plates, 139,000 forks, 94,500 knives, and 50,000 spoons.

Staffing the event required 275 culinary personnel, 40 managers to oversee operations, and 3,100 servers. To assist, Centerplate/NBSE brought in chefs and food service personnel from its other venues in New York, Denver, Florida, and Dallas.

For the general sessions, which included a speech by former Secretary of State Hillary Clinton, the organizers used two different facilities. Keynoters delivered their presentations live at the convention center, and they were broadcast on a big screen at the Verizon Center a few blocks away for the overflow audience.

The planners also had to come up with a strategy for the approximately 200 exhibitors. They didn’t want to have 30,000 to 40,000 people exiting the general sessions at once and going into the exhibit hall, says Ronnie Burt, vice president of sales and services at Destination DC.  So, they came up with a plan to use three facilities for exhibits—the convention center, the Renaissance Hotel, and Howard University—where the sorority started 100 years ago.

Further, they established a color-coded badge system where attendees were granted access to the different exhibit halls during certain blocks of time. So one group might have access for a block in the evening after dinner one day at one venue, and then in the afternoon the next day in another venue. The volume required extending exhibition hours into the evening. “This was a program that would go into the night with the general sessions and concerts, so the exhibits were open later than a traditional exhibit floor,” says Burt. “Overall, from a logistics standpoint, I think things were well planned. Traffic flow was good and we weren’t getting bottlenecked.”

The exhibitors were very satisfied, even those in the “satellite” locations, says Burt. These were primarily retailers selling goods—apparel, logo items, and the like—right on the floor. Many sold out of items by the end of the convention.

The sorority hired additional event staff for security and crowd control to guide participants from one event to the next. In addition to the events at the convention center, Verizon Center, and the exhibit venues, DST also planned an event on the National Mall. Planners worked with city agencies to have extra crossing guards around the convention center and to extend the hours for the Metro on the night of the concert, featuring Patti LaBelle. They also coordinated shuttle routes and alerted taxi companies and restaurants to staff up to handle the rush.

It was not only the largest convention ever for the sorority, it had the biggest economic impact on Washington, D.C., so far in 2013. Attendees spent $74 million in restaurants, hotels, retail outlets, and attractions during the week, says Burt. One hotel told him that sales were up 40 percent compared to the same period last year.  “And the feedback we got from attendees is that they loved it.”

Delta Sigma Theta Sorority Inc. is a private, nonprofit organization whose purpose is to provide assistance and support through established programs in local communities throughout the world. A sisterhood of more than 200,000 predominantly black college-educated women, the sorority currently has more than 900 chapters in the U.S., England, Japan, Germany, the Virgin Islands, Bermuda, the Bahamas, Jamaica, and the Republic of Korea.

Sponsored Content
Inside Contingency Planning at the 2012 RNC
Oct 01, 2012