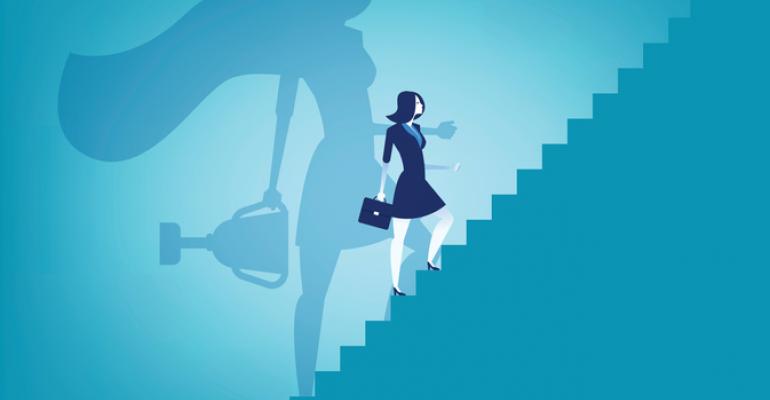 What Does It Take for Women to Excel in the Meetings Industry?

What would you do if your boss put his finger in a glass of water and said, “This is the office with you,” then pulled his finger out of the glass and said, “This is the office without you. Do you see any hole?” Karin Krogh, creative director, Engaging Meetings, shared that story during a campfire session on how women can excel in the meeting industry during IMEX America 2017 this fall. The comment stung, she said, but it also made her even more determined to become a leader—one who would never be so disrespectful of those in her charge.

She posed a number of intriguing, complicated questions to the women (and one guy) who came to the session. We then broke up into small groups to tackle our table’s question before coming back together to share our conclusions. Among the topics we discussed:

• Should there be quotas ensuring women are included in boards and other leadership positions? Krogh told us that in Norway, there’s actually a law that boards have to maintain a certain percentage of women—is that a good idea? This was my group’s topic, and we struggled with it. I maintained that, until the inequity is resolved and having women in leadership positions is a norm, yes, quotas are a good idea because they would ensure that at least we can get a seat at the table.

Others disagreed, saying that it could cause resentment if men feel they have to get some woman, any woman, on the board, regardless of qualifications. To which I countered with my belief that there’s always a qualified woman to be found. You might have to work a little harder to find them, though, because women (at least of my generation) were taught early on to be modest and not toot our horns. They probably will have to be even more qualified for the job than a male candidate, and they will have to work harder to prove themselves, but as with other underserved demographics, we need to find ways to level the playing field. I maintain that quotas are one way to do just that. Karin Krogh got us all thinking—and talking—about women and leadership in the meetings industry.

• How can we support and empower women in the meetings industry? This one had more of a consensus. Women in the industry should share resources and knowledge, and make connections and opportunities for each other. “Don’t be afraid that someone else’s success will mean competition for you,” said one person. Take ownership of being a leader, said another, so you can be a role model for those coming up in the industry.

• What’s the biggest obstacle for women in the meetings industry? Interestingly, most seemed to agree that we are our own biggest obstacle. “We need confidence in ourselves to ‘just do it’ instead of thinking of all the steps and obstacles that’ll stop us,” said one person. “Men just do it and if they fail, they try something else.” Another added, “When we share the obstacles—and how we overcome them—with each other, it’s empowering. Strength comes with vulnerability. We should not be afraid to be vulnerable, but also not afraid to be strong.”

One comment that still rings with me as a pretty potent barrier was, “If you step up, people are going to see you, and they may not like what they see.” It’s hard for women to not take criticism to heart, to wallow in self-doubt, to depend too much on the support of others.

“Let’s stop obsessing about our weaknesses and focus instead on our and each other’s strengths,” said another person. “Let’s shore each other up by filling in the other person’s weaknesses with our strengths, and vice versa.”

Sharing Career Advice
Krogh wrapped up by sharing two of her favorite quotes:

“There’s a special place in hell for women who don’t help each other.”—Madeleine Albright

“Create a career that works for you rather than trying to follow a pattern set by some old white man.”—Fiona Pelham LINK http://www.meetingsnet.com/corporate-meetings/2016-changemaker-fiona-pelham, CEO of Positive Impact Events and former chairwoman of Meeting Professionals International

Then she asked us to give our own quick-bite career advice. Among our answers:

“Have passion and believe in yourself.”

“Don’t be afraid to say what you think. Take responsibility.”

“Be a lifelong learner.”

“The worst they can do is say no—don’t be afraid to ask.”

Mine was: “Don’t wait until the stars all align perfectly—jump in and do it. Stretching out of your comfort zone is the only way to grow.”

What do you think we all can do to encourage women who want to take leadership roles to go after them? What are some of the barriers we still have that keep women from developing their leadership potential?