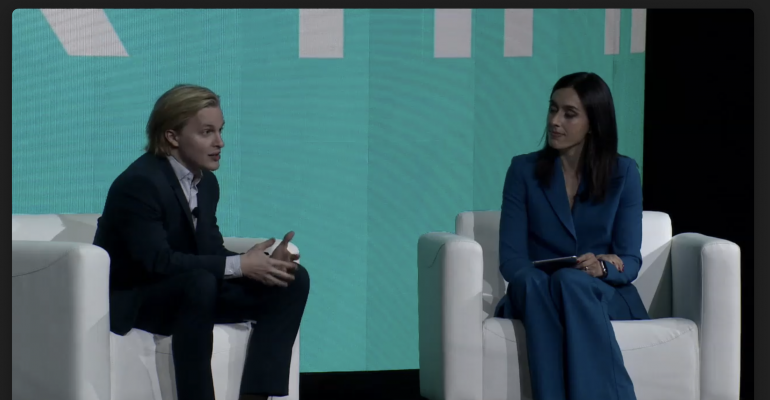 PCMA’s Convening Leaders conference opened in Las Vegas on Monday with masks on and food for thought from an investigative journalist.

Despite an unprecedented Covid positivity rate of nearly 25 percent among those tested in and around Las Vegas, nearly 2,500 event planners and suppliers came to the city to attend the Professional Convention Management Association’s Convening Leaders conference, which required vaccination proof as well as mask-wearing in all meeting and hotel spaces except when eating. Another 600 attendees chose to participate virtually in the January 9-12 event.

With actor Daniel Levy a late cancellation for the keynote presentation on Monday morning—attendees were notified on January 7 that Levy could not come to Las Vegas due to “an extension of a previous contractual obligation”—investigative journalist Ronan Farrow stepped in to deliver a presentation that resonated with the meeting- and event-focused audience.

Farrow—who is known for his 2017 article in The New Yorker with first-hand accounts from women who alleged they were victims of sexual assault by Hollywood producer Harvey Weinstein—told PCMA attendees that the amount of misinformation found on the internet has created a crisis of trust among the public for media outlets and even for well-respected nonpartisan entities such as Pew Research Center. Further, “that misinformation proliferates from algorithmic bubbles” on websites and social-media sites, which keep pushing at readers the same perspectives on important issues, thus reinforcing their biases and reducing their ability to be fully and accurately informed.

Part of the solution, said Farrow: in-person meetings. “Without traditional town squares anymore, how can we connect and share information and perspectives? Events.” He noted that he uses professional and social events alike for his work, which involves developing sources and generating stories that are important to society. “We all need to do our part to encourage transparency” in our organizations and industries, and events are a critical tool for doing so, he added.

To open his presentation, Farrow used a bit of humor. “So, how have things been in the events industry lately? Anything going on that’s affecting your business?” His quips got strong laughter from the audience. And near the end of his presentation, he said, “It’s going to be chaotic for a while, but it is incredible that we are gathered right now, in our masks but still doing it.”