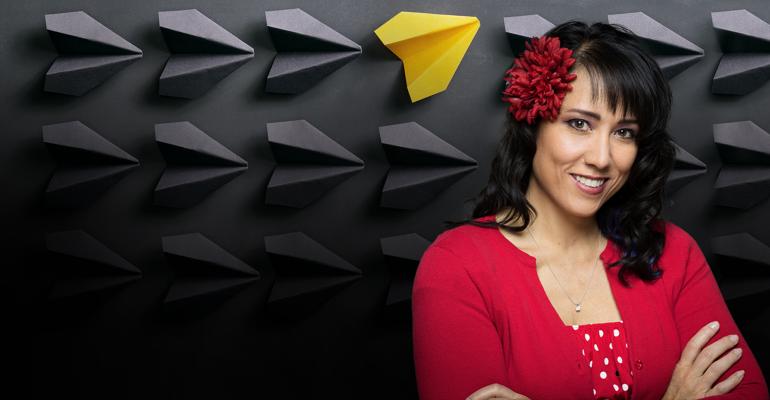 How I Got Here: Maralynn Adams, CMP

So much of this job is what you’ve done before, what you’ve learned from it, and how you handle unexpected situations.

Maralynn Adams began her career in corporate America with stints as a marketing program specialist at Oracle and a senior project manager at Cisco. After honing her skills with them, she started her
own more than 10 years ago and—because who needs down time?—she is now using many of the same skills as an independent film producer as well.

“There is a ton of crossover from event production to film production,” she says. “I’m still finding and managing people, navigating personalities, lining up locations, feeding cast and crew, and disseminating logistical information.” Navigating personalities may be a little easier for Adams, having studied behavioral science at San Jose State University, but the rest of her skills were learned on the job.

In becoming an independent planner, Adams says some things are similar to the corporate world, including working long hours, but there were also skills she had to acquire. “Being independent can mean it’s tough to find clients,” she says. One approach is to join industry organizations like MPI and try to network, but Adams found their events to be supplier-heavy without many prospects for her. There are also drawbacks to bidding on every project that you hear about through the grapevine. She says, “You can put your whole heart and soul into a proposal and then the client steals your ideas and doesn’t hire you to do it.”

To avoid this, Adams started small. She talked to executive assistants about the events their company needed help with, and they introduced her to more people within the company who hired her for small meetings or sourcing advice. Her goal was to build up trusted relationships and get repeat business. The relationship is so important to her that she has turned down jobs in the past saying, “I refer clients to other people because I want them to have the best experience for something when it is not my forte.” She focuses mainly on incentive and executive programs, big sales kick-off meetings, and large conferences, but not trade shows.

• Reach out to your network when you need to

• Be prepared to be flexible and spontaneous to help out clients, but protect your time and resources with a proper contract

Adams recommends nurturing relationships with contacts even at your smallest clients. “You never know where they will end up. They could become the CEO and you go from doing a few small meetings to planning huge events for them.” Another advantage of having repeat clients is knowing how they operate and designing a contract to protect both of you. Adams says, “I’m real clear that if you wait on a decision on my proposal, the price goes up and availability goes down. I put dates in the contract so the client knows I can still do it if they miss a deadline, but they will pay a premium for doing things at the last minute.”

Adams’s experience producing for Wild Dogs Productions, an independent film company, means she is used to tight deadlines and adapting on the fly. As an example, she says, “One time we were filming outside a construction site and a security guy came out and started locking up. We begged him to let us in to film a chase scene and he looked at his watch and said, “You’ve got 15 minutes.’” It was just enough time to get the take. She’s also persuaded people to loan her five horses and bring them to the set of a Western for free, and drills cast members on location using fake guns on what to do if the police arrive to investigate. (For future reference, put them on the ground and raise your hands.) So, when long-time client Google called and asked for a reward trip for a group of 350 people on a few weeks’ notice she remained unfazed. “We took them to Maui and locked down most of the activities on the island. It was banana pants!” She negotiated with each vendor to take every activity slot they had available so that there were enough choices for all the attendees, and, in a convergence of her two careers, was able to have her boyfriend, a filmmaker, create a highlight video of the trip for the attendees to enjoy afterward. Her approach under pressure is, “You do what it takes to get it done and make people happy.”

When Adams decided to go out on her own, the biggest challenge after finding clients was figuring out how to charge them. Other independent planners, she says, “don’t want to discuss payment because it can be seen as price fixing. It can also lead to undercutting and people are generally uncomfortable talking about getting paid.”  One of her passions, golf, ended up helping her solve the problem. At one point Adams had intended to follow a career as a golfer until injuries ended her dream, but while playing at the Meetings Industry Ladies Open golf tournament, Adams met Sandy Bauder, the owner of Professional Planning Group in Texas. Now a great friend and mentor, Bauder not only shared some of her wording for contract clauses, she also helped Adams realize that clients are paying for her expertise, not her time.  Although Adams had been billing on a guestimate of hours she would work on a project, any obstacles meant either her client faced unexpected costs or her rate dropped. Now she figures out a flat fee or budget percentage so that everyone is on the same page. However, attention to detail and sourcing are part of why her clients keep coming back. Adams says, “It offends me personally to overpay even though I make more money on a bigger budget.” She’s so proud of her cost-saving strategy on event badges at one of her old jobs that it is still on her LinkedIn page.

In order to get that valuable expertise, though, Adams says sometimes you have to learn while doing unpaid work. She recommends newcomers to the industry volunteer at charity fundraisers and community events to build a resume, and reach out to local convention and visitors bureaus for short-term jobs to get experience in lots of different aspects of events. She says, “Brace yourself to do many things for free. So much of this job is what you’ve done before, what you’ve learned from it, and how you handle unexpected situations.”