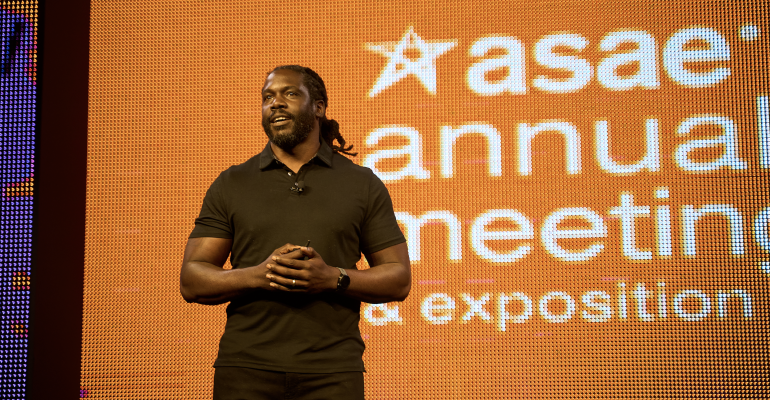 3 Rules for Managing Your Team’s Innovation

At ASAE’s annual meeting this week, serial entrepreneur Marcus Whitney presented his framework for brainstorming new solutions and initiatives, and then seeing them through.

Earlier this week, Nashville was a lively host for the nearly 5,000 attendees of the American Society of Association Executives’ annual meeting and exposition, the organization’s first in-person annual meeting since 2019 in Columbus, Ohio.

This year, much of ASAE’s session content addressed how association-meeting managers and their bosses must think creatively in the post-pandemic environment, where their members and sponsoring organizations have different needs and priorities than before.

During the morning general session on August 21, serial entrepreneur and Nashville resident Marcus Whitney told the story of how he discovered three critical steps for innovating successfully.

After growing up in a tough Brooklyn, N.Y., neighborhood, dropping out of college, and struggling as a young father to pay rent while doing menial jobs, Whitney was determined to change course in the early 2000s. At night, he learned computer programming through books and free user-group meet-ups, the latter of which led to a job at a Nashville-based national healthcare company.

Working there exposed him to prominent players in the venture-capital business, which led Whitney to launch Jumpstart Nova, the first venture fund in America investing exclusively in Black-founded and -led healthcare start-up firms.

In the midst of all this, Whitney also leveraged his local business relationships to develop a successful business plan for a new professional soccer franchise in Nashville—even though the city began at the bottom of a list of 14 cities that Major League Soccer was considering for an expansion team.

A Blueprint for Driving Innovation
In the course of building two large organizations from the ground up after his unsuccessful early years, Whitney realized that “there is no innovation without failure, the lessons you learn from it, and the unique power and perspective it gives you.”

Whitney also came to understand three actions that brought about his success with his innovative projects:

• Establish constraints that force clarity. Paradoxically, a blank check and a blank sheet of paper rarely bring about the best business ideas, Whitney noted. Fortunately, most teams don’t have those as they try to innovate because “an environment that is constrained by money or time or both is best for innovation. Constraints bring clarity of purpose,” said Whitney, citing his precarious situation in the early 2000s as one that forced him to have a tight focus, which drove his subsequent plan and his efforts to make it work.

“When you don’t think you have enough of a budget or timeline, that’s when you will come up with a truly innovative solution.” So, don’t allow your team to see those conditions as insurmountable obstacles.

• Establish an objective that is outside your comfort zone. Whitney had zero experience in computer programming when he decided to enter that field, and only a basic understanding of the venture-capital discipline when he decided to create a fund to support emerging Black-owned healthcare companies. And what did Whitney know about soccer prior to signing on as chairman of the expansion-team acquisition project? Very little.

“Don’t edit yourself until you absolutely have to,” he told the ASAE audience. “Have an audacious goal that will stretch your abilities in ways you did not realize were possible.”

The skill that’s most critical here: communicating to potential partners how wielding their influence will further an initiative that brings specific benefits to the industry, the community, or to society as a whole.

Lastly, Whitney said, “it can be lonely and uncomfortable in the moment when you use your power for something you think is right, but others don’t see it yet. But you have to jump into the arena and simply make friends with failure on the journey to success.”