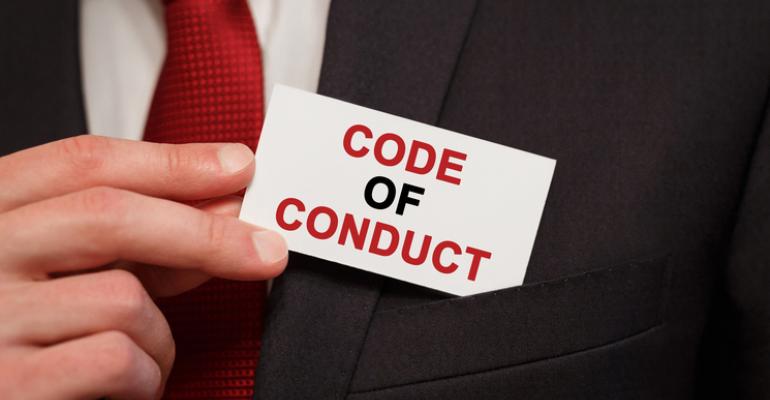 Why Your Conference Needs a Code of Conduct

Today’s bullying and harassment headlines underline the need to have a policy in place for when attendees behave badly.

While you can hope that no one at your conference will be the subject of the next sexual harassment headline, no matter how professional your group is, there’s always a possibility that someone will do something that causes discomfort or worse. Add an alcohol-fueled reception or two, and the likelihood rises proportionally.

Not only will people not want to come to your events if they can’t feel assured that they will be treated with respect, but there also is the possibility of legal liability should someone be harassed to the extent that damages are incurred, says attorney, business advisor, and speaker Joshua Grimes, Esq., with Grimes Law Offices LLC.

“The bottom line is that it is essential to have a code of conduct for all meetings, from national conventions to an internal board meeting,” he adds. “The host organization must let its attendees, speakers, sponsors, exhibitors, and staff know what is expected in terms of behavior, what is a violation of its code of conduct, and the consequences for those who violate it.”

What Should Be Included in a Code of Conduct
Grimes suggests that a meeting code of conduct—he also recommends having a general organizational code of conduct as well—should include the following:

• What behavior is not acceptable, such as offensive verbal comments, bullying, intimidation, stalking, inappropriate physical contact, and unwelcome sexual attention. He adds that the code should also discuss what behavior is not allowed on the organization’s online and social media networks.

• Where to go for help if you feel harassed. “While it’s great to have rules, people need to know who to turn to get relief, from a conference staff member to the venue security or the police, depending on the severity of the incident,” says Grimes.

• Who is expected to comply with the code, including sponsors, exhibitors, staff, attendees, venue employees, and employees from other support suppliers.

• What the consequences are for violating the code of conduct, up to and including being expelled from the conference with no refund of registration or other applicable fees.

Grimes also suggests that meeting host organizations include a radio button that people have to click to indicate they have read and agree to abide by the conference code of conduct as a requirement of the registration process.

“You have to have rules to protect people—and enforce them,” he says. “It will not only make organizations look bad if they don’t address harassment or bad behavior promptly; it could open them to liability. It’s hard to regulate bad behavior if you don’t have a policy and someone designated and educated on how to handle the situation.”

Here's some more good advice on building an event code of conduct, from a veteran HR consultant.