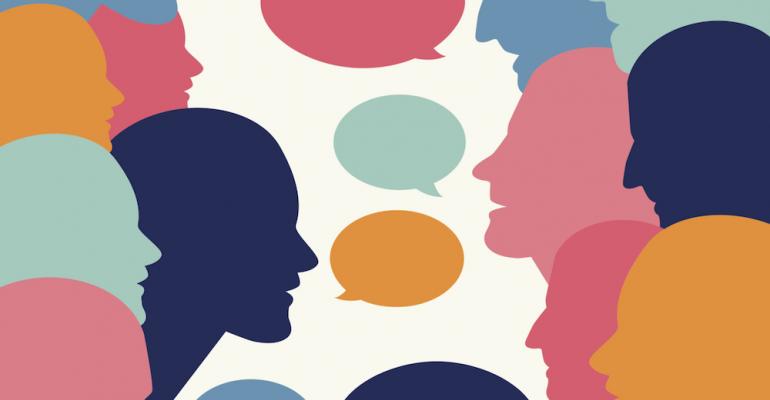 Even something as simple as a grasshopper can mean different things in different cultures:
U.S.—Pest
China—Pet
Northern Thailand—Appetizer
That example, taken from an HSBC global bank ad seen at Heathrow airport in London, was just one of many reasons cross-cultural communications can go awry, said Ulla Buchner-Howard, CMP, DFA, adjunct professor at New York University’s Tisch Center for Hospitality, Tourism, and Sports Management, at a MeetingsNet Beyond Borders conference.

Here are five more things to watch for when working cross-culturally provided by Buchner-Howard, who also is a mediator at SafeHorizon Mediation Center, president of the German American Roundtable, and owner and president of ubh International Services.

Howard quoted George Bernard Shaw to highlight the first thing to watch out for: “The greatest problem with communication is the assumption it has happened.” Even something as simple as the cleanliness level you expect at your meeting hotel may need to be spelled out precisely. “I know my husband has a different meaning for clean than I do, and that’s in the same household,” she pointed out. Imagine how meeting industry terms you use every day may mean something very different in another country.

Helpful hint: When in doubt, paraphrase what you just heard, and have the person you’re speaking with explain what you just said to them back in their own worlds.

Buchner-Howard told a story from a trip to Bangkok back in her days as a flight attendant. She needed to get her laundry done by morning, and left it in a bundle outside her hotel room door. Where it sat, and sat, until finally after dinner she hunted down housekeeping and room service people to make sure they understood she needed it done by morning. Everyone she spoke with said, “Yes ma’am.” But still the pile sat. She finally went down to the front desk and found a person who spoke Western-style English to ask. He explained that “Yes ma’am,” just meant that the staff had heard that she said something, not that they understood what she said. “That’s why paraphrasing is important,” she said.

2. Know Who You're Talking To

Buchner-Howard outlined how people from different countries tend to fall into a spectrum of behavioral tendencies. While there will still be challenges, knowing the mindset of the person you’re negotiating with will help you keep things in perspective.

Multi-Active
Countries: Argentina, Brazil, Chile, Mexico, Hispanic America, Italy, Portugal, Spain, and Sub-Saharan Africa
Tendencies: A “no problem, it’ll happen soon, don’t worry about it” attitude and a lot of verbal and non-verbal communication. “Everything I do in Italy, whether contract negotiations or meetings-related, is, ‘Non c'e problema.’ There is no problem—except that what you want doesn’t get done when you need it done,” said Buchner-Howard.
Contract and negotiations attitude: “Feelings before facts—truth is flexible.”

Reactive
Countries: Japan, Vietnam, Taiwan, Hong Kong, China, Korea, and Thailand.
Tendencies: Keep emotions under wraps, listen more than talk, and be very non-confrontational. She said to expect a lot of difficulty in getting tasks accomplished quickly because there tends to be a lot of bureaucracy and coordination involved.
Contract and negotiations attitude: “Diplomacy over truth”

Helpful hint: Know the general tendencies, but don’t assume that all Germans will have rigid mindsets and like lederhosen, she said. Individuals, of course, may vary from the cultural norm.

Nonverbal signals are sent through body pose, gestures, and even eye movements, said Buchner-Howard, adding that up to 93 percent of communication consists of non-verbal behaviors. But even nonverbally, a grasshopper isn’t always a grasshopper. She told a story of a student who always would look away instead of making eye contact. Thinking something was wrong, she asked the student, who was from Mali, if there was something she could help her with. The student explained that in her culture, she was not allowed to look directly at people.

For in-person communications, be aware that our body-space needs also vary from country to country. Americans need about 2 feet to 2.5 feet of space; Middle Easterners, about six inches. “And the kissing,” she added. “If you’re in France, don’t forget there’s a third one coming.”

Helpful Hint: Even for Skype and other types of video calls, be aware of the body language you use, she said.

4. Time Zones and Other Scheduling Issues

Of course, be aware of time zones when making international calls, but also think about the schedules of those on the other end of the phone. For example, between noon and four in the afternoon, there is not a lot of communication that’s going to happen in countries like Portugal, Spain, and Italy, which tend to shut down for a few hours after lunch.

Helpful hint: Keep local scheduling customs in mind for your meeting agenda as well. When in Mexico City, chances of locals showing up for a 7 p.m. dinner are slim to none, since they normally wouldn’t think of eating until at least 9 p.m.

You don’t have to become fluent, but it helps to learn at least a few rudimentary words in the language of the person you’re attempting to communicate with. As one person in the audience said, “If you try to use words in their language, they’re very welcoming, but if you just go with Americanisms, they may shut you down.”

Helpful hint: Don’t use jargon or sayings that could be misconstrued. As Buchner-Howard pointed out, the American “I’m pulling your leg” translates into German as, “I’m sitting on your arm.” Use simple, clear words and phrases that will more easily translate on a literal level.

This article was originally published at MeetingsNet.com in July 2014.

All You Need to Know About International Contracts
Jun 01, 2000