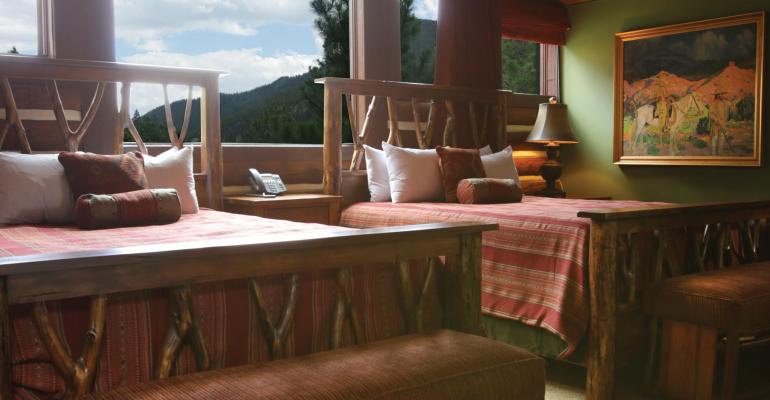 <p> A bedroom in one of the cabins at The Ranch at Emerald Valley.</p>
Destination & Venue News>U.S.

The Broadmoor Hotel’s brand new Ranch at Emerald Valley had to close for the season six weeks early because of extreme flooding in the area.

The Ranch at Emerald Valley, located in Pike National Forest in Colorado Springs about eight miles from the Broadmoor, consists of 10 upscale cabins with one-, two-, and three-bedroom units. It had just had its grand opening on August 1.

Colorado was hit with record rainfall in mid-September with some areas getting up to 21 inches of rain over a one-week period. The rains caused widespread flooding resulting in 10 deaths, with about 200 people still unaccounted for, according to reports. Officials estimate about $2 billion in property damage.

At the Ranch at Emerald Valley, roads in and around the property were eroded and one of the cabins was damaged from flood waters, states the Denver Post. There were no injuries, but 22 guests and 25 staffers were evacuated, according to the Post. Guests were rebooked at the Broadmoor Hotel, which was not impacted by the floods. All repairs will be completed this fall, says Ranch at Emerald Valley spokeswoman Brigid Finley.

The Ranch was scheduled to close for the season on October 31. Bookings between now and then have either been rescheduled at the hotel or pushed to 2014, says Finley. The Ranch will reopen May 1, 2014, as planned and reservations are now being accepted.