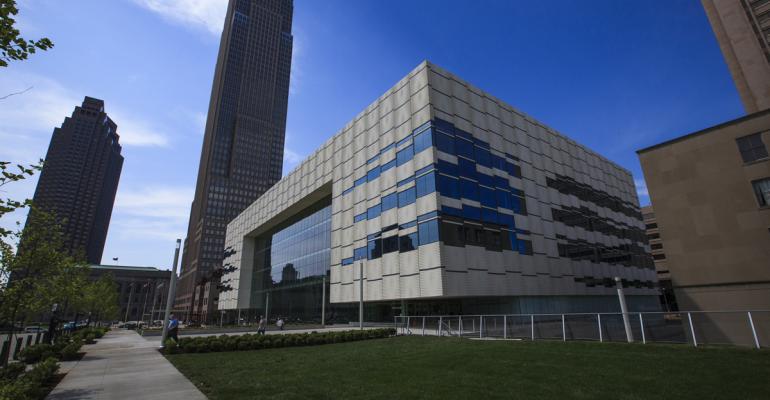 With an expanded convention center open for business, the nation’s first exhibition center for medical innovations hosting its first event, and a headquarters hotel in the works, Cleveland is reinventing itself as a meetings destination.

At a ribbon-cutting ceremony on October 8, local officials marked the completion of phase 1 of the Global Center for Health Innovation. The 235,000 square foot facility, adjacent to the Cleveland Convention Center, will have four floors of permanent tenants showcasing healthcare-related exhibits.  Among the tenants is the Healthcare Information and Management Systems Society, Johnson Controls, and the Cleveland Clinic. It also boasts an 11,000-square foot ballroom that can be used for meetings.

One of the tenants, the Cleveland Clinic, hosted an event in the Global Center October 14-16, the first at the facility. But the facility won’t officially open to the public until February 2014 after Phase 2 construction is complete. The third and final phase will be complete  in the fall of 2014.

It is right next to the expanded 767,000 square foot Cleveland Convention Center, which opened July 19 with the National Senior Summer Games. It was the first of about 100 events at the center this year. The center features a 230,000 square foot exhibition hall and a 32,000 square foot ballroom.

Combined, the convention center and the Global Center for Health Innovation encompass 1 million square feet. Cuyahoga County, which owns both venues, tapped SMG to manage them.

Cuyahoga County officials also announced that a 600 to 850 room Hilton hotel will be constructed right next door, serving as the headquarters hotel or the convention center. The building will be funded through a combination of tax-exempt bonds and other tax-revenue sources.

“In combination with the new Cleveland Convention Center and Global Center for Health Innovation, the hotel represents another step forward in the revitalization of our region,” said Cuyahoga County Executive Ed FitzGerald.

The hotel will feature subterranean links to both the convention center and the Global Center for Health Innovation. The hotel will have approximately 55,000 square feet of meeting space, a full-service restaurant, lobby bar and recreation facilities, including an indoor pool and fitness center.Construction will begin by the end of this year and will be completed by 2016.