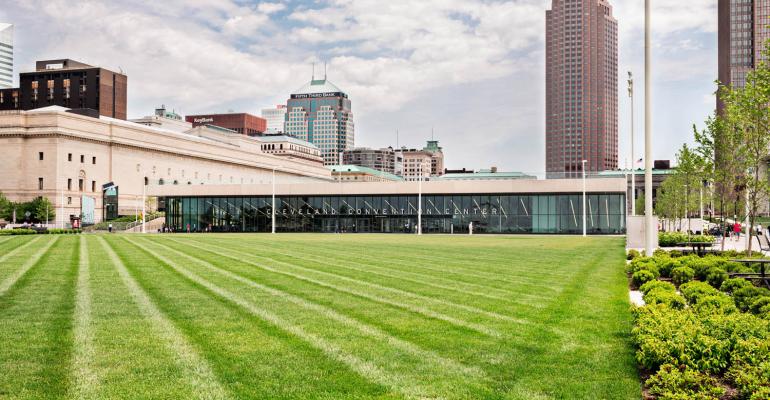 The new Cleveland Convention Center, which officially opened June 14, is the crown jewel of a nearly half-billion-dollar public investment designed to revitalize the city’s downtown.

Replacing a dated, dark, and cramped facility, the new underground complex brings in splashes of sunlight and overlooks some of the city’s marquee attractions, including the Rock and Roll Hall of Fame and Museum. Its contemporary design also incorporates the latest conveniences and ensures the requisite nod to sustainability.

For exhibitions, the L-shaped center contains 230,000 square feet of Class A exhibit space with 30-foot ceilings and columns that are spaced 90 feet apart. The floor can be divided into three separate halls. The loading area features 17 weather-protected docks.

The 35 meeting rooms are each connected to the back of the house, providing seamless access to food and beverage service and temporary storage of AV and other items. Wireless connectivity, multisite videoconferencing capability, and customizable HD displays are incorporated into the design. The staff uses iPads to control lighting and thermostats in the rooms.

A 32,000-square-foot, column-free grand ballroom overlooks the city’s lakefront. It is supplied by kitchens equipped to plate and hold up to 2,000 three-course meals or brew 90 gallons of coffee simultaneously.

A green attitude prevails at the convention center. The green roof above the exhibit floor is part of a 10-acre park-like space surrounding the center and available for events. In addition, the facility has earned Silver LEED certification.

In addition to its newness, what is likely to distinguish Cleveland’s facility most is an unusual component of the development, the Global Center for Health Innovation, which is connected to the convention center. The dramatic four-story structure will house showcases for major medical equipment and healthcare providers and a floor devoted to the Healthcare Information and Management Systems Society’s innovation center, a testing, demonstration, educational, and exhibition space. An 11,000-square-foot junior ballroom and atrium lobby provide meeting and event options. The Global Center is expected to open in October.

Cleveland—home to the Cleveland Clinic and University Hospitals, both major healthcare players—is a logical location for such a development, and many of the events are expected to have a medical focus, but groups on the books so far are all over the map. The first major event is the National Senior Summer Games July 13, when the city expects to host more than 35,000 athletes and spectators.

The construction cranes will remain well after the health innovation center ribbon-cutting, too. The new Westin Cleveland Downtown, a major overhaul of an existing hotel site, is set to open in spring 2014. Located a block from the convention center, it will contain 484 guestrooms and 20,000 square feet of meeting space. And early in June the city announced plans to spend $260 million of public money to erect a 600- to 650-room convention headquarters hotel adjacent to the new convention center. City officials are pushing for a 2016 opening.

Eight existing hotels are within easy walking distance of the convention center. In addition, Starwood opened a 150-room Aloft in June as part of a mixed-use development around a new headquarters for Ernst & Young.

In the Land of Lincoln, Prairie Capital Convention Center Gets Upgrade
Apr 30, 2013