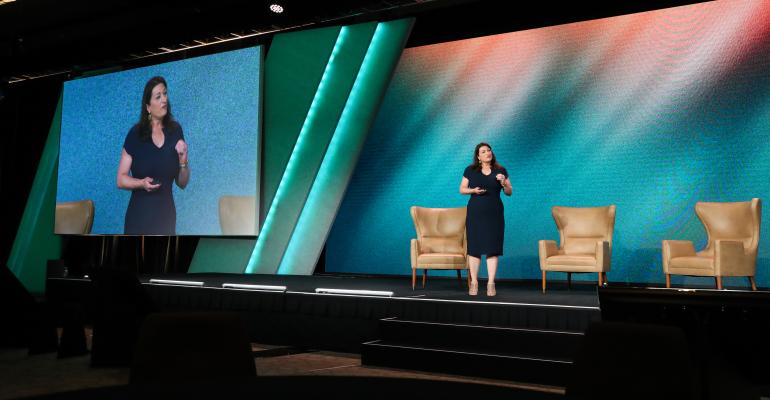 Fist Bumps and Even a Few Hugs: the IRF Invitational Returns

When the Incentive Research Foundation’s premier event convened in person and (mostly) mask-free, IRF President Stephanie Harris laid out the organization’s vision for the years ahead.

As the saying goes, luck is what happens when preparation meets opportunity, and the Incentive Research Foundation had some luck with the timing of its IRF Invitational event June 2-5 in Marco Island, Fla. Aligning with the latest guidance from the Centers for Disease Control and Prevention, vaccinated attendees were able to go mask-free indoors and out, creating a celebratory atmosphere for the 183 hosted buyers, 227 sponsor attendees, and others attending the event at the JW Marriott Marco Island.

The Invitational featured two days of education, mostly focused on post-pandemic recovery for the incentive travel industry, and three nights of well-orchestrated special events, including the IRF Auction, which raised a total of $430,583 for the research at the heart of the IRF mission.

Attendees heard from the “new” IRF president, Stephanie Harris, on the first morning of the conference. While Harris has served as president of the IRF since fall 2019, this was her first in-person Invitational, and she used some of her time in the spotlight to walk attendees through the organization’s big-picture goals.

The IRF’s five-year plan, called Vision 2025, has three pillars, Harris explained: improving the relevancy and impact of its research, bringing research initiatives to Europe and beyond, and distributing more IRF content to those who don’t currently use or who are just starting to use incentives.

The pandemic slowed some of the IRF’s efforts on these fronts over the past 15 months, Harris said, but much has been accomplished:

Improving Relevancy and Impact of Research
This goal revolves around taking the IRF’s academic research and repackaging it “in modern commercially oriented forms, with the goal of increasing the usage of the research to make it more sought after,” Harris said. The change will “respond to the societal shift in how content is consumed,” she continued, noting that infographics, videos, and summaries will “take what is deep and academic, and make it easy to take in and very relatable.”

Vision 2025’s progress in the past year was primarily in this pillar. IRF now creates infographics as part of every new study, it shifted the research agenda to include Pulse studies, joined the Event Industry Council’s APEX Recovery Task Force and provided content to help the industry broadly, launched community conversations, and more.

Geographic Expansion
The IRF long-term plan is do more research in Europe, with an eye to global expansion. “Global expansion is about broadening the reach and perspective of the IRF to match the global nature of business today,” said Harris. “This is particularly important for those who work in multinational corporations and will give our supplier audience expanded engagement opportunities with buyers.”

The progress on this pillar has been limited, but IRF again partnered with the Society for Incentive Travel Excellence and the Financial and Insurance Conference Professionals to produce the Global Incentive Travel Industry index, and also formed a task force to lay out the plan for strategic expansion. “And we intend to start hard down that path in 2022,” Harris says.

Expanded Distribution
“Distribution is about reaching beyond the [incentive travel] believers,” Harris said, with the goal of reaching “non-users and nascent users and educating the next generation of incentive champions.” IRF has begun designing toolkits that will give people a place to start if they’re thinking about using an incentive travel program. The kits, expected to launch later this year, “are not intended to replace the valuable contribution of third parties, but rather provide the right questions to ask, RFP templates for third parties, calculators to demystify the budgeting process,” and other resources.

The IRF’s next research report, coming out in late June, looks at the incentive travel preferences of program earners in today’s environment. The organization’s next in-person event, the Leadership Insights Forum, is set for October 11-12 at Encore Boston Harbor. The 2022 Invitational will be held at the site originally planned for 2020: Hyatt Zilara and Hyatt Ziva in the Dominican Republic.