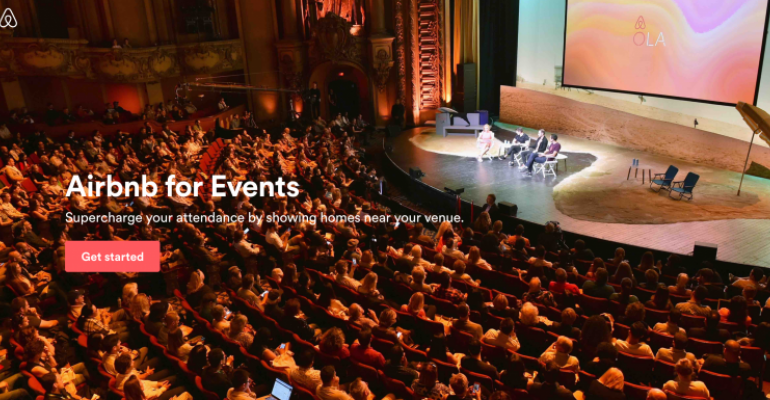 The shared-economy behemoth is making a play for meetings and events attendees.

Airbnb, the online marketplace for short-term lodgings, today announced a new tool for event organizers to offer attendees accommodation in homes brokered by Airbnb. Airbnb for Events is an interactive map of lodgings near the site of an event that planners can use to either book directly or embed on their registration site.  It is the first embeddable widget produced by Airbnb, and the company has already begun using it on sites such as WeddingWire.com. Attendees who register too late to find space in the room block, or who prefer to stay in an Airbnb, can make a reservation with their registration.

Since the events industry is booming but the number of hotel rooms is finite, it makes sense for Airbnb to court event planners and attendees. While most meeting attendees are traveling for business and require the services and guarantees offered by the major hotel chains, there are some who would like to bring family members or who prefer to stay somewhere with a kitchen and laundry facilities. While Airbnb has been criticized for supporting commercial activity without enforcing safety regulations and respect for neighborhoods, there is evidence that Airbnb is becoming more attractive to business travelers.

For city-wide events, including Airbnb in official lodgings can relieve some of the pressure, especially when local governments are reluctant to invest in new hotels for the short term. Airbnb added an estimated 6,000 rooms to the available lodgings during the London Olympics.

Before the announcement, the prevailing wisdom in the meetings and events business seemed to be that Airbnb is not a threat to the room block. Michael Dominguez, chief sales officer for MGM International, said at an event in September 2017, that while Airbnb is making inroads in San Francisco and New York City, it is charging roughly the same as hotel prices, so event attendees would not opt out of the room block for financial reasons. In Las Vegas, Dominguez suggested MGM would be happy to use Airbnb as another sales channel for visitors.

Christopher Nassetta, president and CEO of Hilton, also mentioned Airbnb in San Francisco in an interview at the Professional Convention Management Association Convening Leaders conference in January. He said, “We are not afraid of Airbnb. They are in the business of lodging, we are in the business of hospitality.” He suggested that Airbnb is likely to find traction in places like San Francisco where there are not enough hotel rooms to accommodate large conferences.

Ironically, Airbnb’s first clients were three travelers in San Francesco for a convention who could not find a hotel room.

For meeting planners, it is not clear whether embedding the Airbnb widget on a registration site will help or hinder conference accommodation plans. In cities with tight accommodation markets, offering alternative lodgings could help boost attendance. If Airbnb is willing to share reservation data with planners, it could help them determine how many attendees are opting out of the room block and the reasons why. On the other hand, Airbnb accommodations typically do not come with guarantees of standards and meeting planners considering using the widget should consult legal authorities on whether including it in their accommodation plan at registration makes them legally liable if a guest has a bad experience.