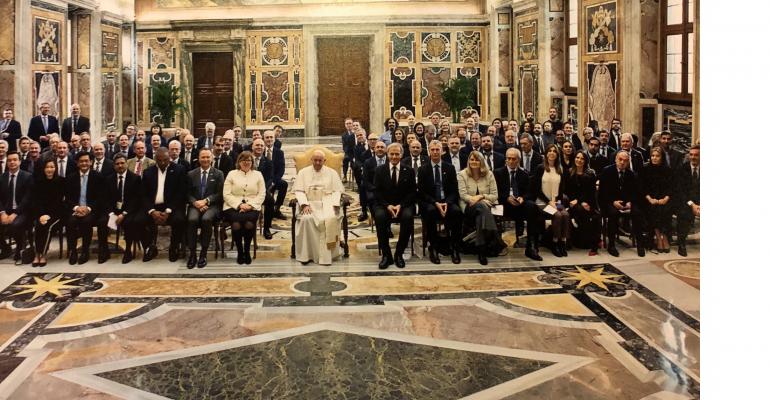 Meeting the Pope: Event Professionals Get a Unique Attendee Experience

The Eternal City is off-limits to travelers due to the COVID-19 quarantine, but a recent experience there for UFI’s Global CEO Summit will live in attendees’ memories forever.

UFI, a global association of trade show organizers, held its Global CEO Summit in Rome in early February, and while the Eternal City is memorable all by itself, the 100 attendees were treated to an experience that they likely won’t forget: a private audience with Pope Francis I.

Executive Vice President and Informa Markets Group Chief Representative for China, Michael Duck, was lucky enough to be part of the group and says that initially, the group did not know that an audience with the pope was possible. He says, “Just two weeks before our conference, the UFI Board was made aware that there was a possibility that it may be arranged, as the Pope knew of the good our industry does in bringing communities together.” The pope knew of the group’s summit in Rome because Pietro Piccinetti, administrator and general manager of Fiera Roma, one the largest and most prestigious exhibition centers in Europe, had used his contacts at the Vatican to send word. He says, “I have been collaborating with the Vatican for many years, from charity events to cooperation projects, and I have numerous contacts.”

Piccinetti, who was born in Rome but, like Francis I, grew up in South America, saw an immediate association between the trade show and events industry and the current Vatican. Piccinetti sees Pope Francis as revolutionizing the church to make concrete and effective actions to bring people together. He calls that, “A perfect connection with the exhibition system. Our industry creates bridges, not walls, and provides huge opportunities for economic growth while dissolving tensions between individuals, organizations, and international realities.”

As soon as Rome was confirmed as the host city for the meeting, Piccinetti wrote to the Vatican explaining the industry contributions of the group, and when he received a positive response, met several times with the pope’s staff to figure out the details of the meeting. Piccinetti stresses that although he facilitates meetings and events at the Vatican, “Meeting Pope Francis is a unique and inimitable experience. It’s fundamental that the basis of the meeting is a true and sincere Christian will, and not just for marketing.”

Once the meeting became likely, attendees were asked to provide copies of their passports. Although the potential for the audience was announced two weeks before, attendee Michael Duck says that it was only confirmed a few days beforehand when background security checks were completed. Just visiting the papal palace was a highlight for Duck, he describes the marble-floored ante rooms as stunning, and although the attendees passed through airport-style security with x-ray machines and bag searches, they were allowed to keep their phones to take selfies with the pope. Duck says that the pope arrived in the meeting room flanked by two cardinals and escorted by three Swiss guards in colorful uniforms. After reading an address written specifically for the group, praising the meetings and events industry because it, “strengthens bonds of solidarity and fosters mutual enrichment between the members of our human family,” the pope shook hands and spoke with each of the 100 attendees.

Duck says, “When my time came to meet him, I said ‘Thank you for your kind words’ and he replied ‘Grazie’ and looked deep into my eyes. It was wonderful to meet this nice and humble man.”

For a group more accustomed to arranging events, it was extraordinary to be on the receiving end of such an experience. Duck says, “Everyone came away with a feeling that we had met and felt the presence of a very special person.”