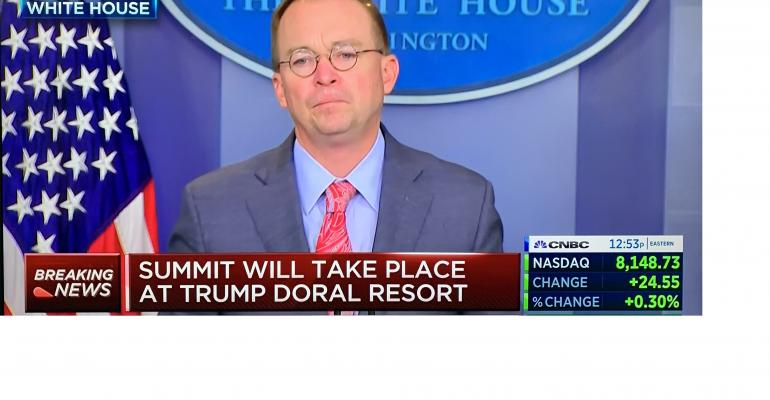 Mick Mulvaney faces hard questions from the press corps about the G7 Summit's site selection. He seems to be thinking, "Can't we talk about Syria instead?"
Global Meetings

G7 Controversy: Trump to Host 2020 Summit at His Own Property

Okay planners, where would you have placed this high-level meeting? We want to know!

Sure, meeting planning is pretty stressful. But imagine having to stand in front of the House Judiciary Committee of the U.S. Congress to defend a site-selection decision you made for an upcoming meeting. Well, that just might happen to Mick Mulvaney, acting White House chief of staff for President Donald Trump.

On October 17, Mulvaney announced that the 2020 G7 Summit will be held at Trump National Doral Resort in Miami. At the daily press conference later that day, Mulvaney was bombarded with questions from the White House press corps, on everything from the possible violation of the Emoluments Clause in the U.S. Constitution forbidding elected officials from gaining personally from government activity, to why the other 11 resort properties on the site-selection list weren’t chosen.

In defending the decision to use Trump Doral, Mulvaney said that because the summit can be held at cost at the property, the government will save millions of dollars while President Trump will not see any profit. But what is unclear is whether the property will use the summit in future promotional campaigns to bolster its reputation in the meetings market, which of course brings financial benefit to the property's owners.

Mulvaney also noted that Trump Doral features individual guest-room buildings, so that each national delegation can exclusively occupy its own building to ensure privacy and security. Lastly, Mulvaney noted that “we won’t have to bring in supplemental oxygen tanks for attendees because the property is not at a high altitude, like some of the other properties on the list.”

Yep, we can hear your eyes rolling about that last one.

Where Would You Put the G7?
Politics aside, we wondered, just for fun, which U.S. hotel or resort would meeting professionals pick to host the G7. You know the market best, so tell us what you think!

Below are some specs for the Trump National Doral Miami, so use that as a starting point—but let’s say your preferred property should have at least 400 rooms. (The 2018 G7 was at Quebec City’s 405-room Fairmont Le Manoir Richelieu.) Also consider convenience, security, and service quality.

Email your suggestion to [email protected] using the subject line “G7 Summit.” We’ll report a sampling of results next week—totally anonymous, of course. Suggestions from planners only, please!