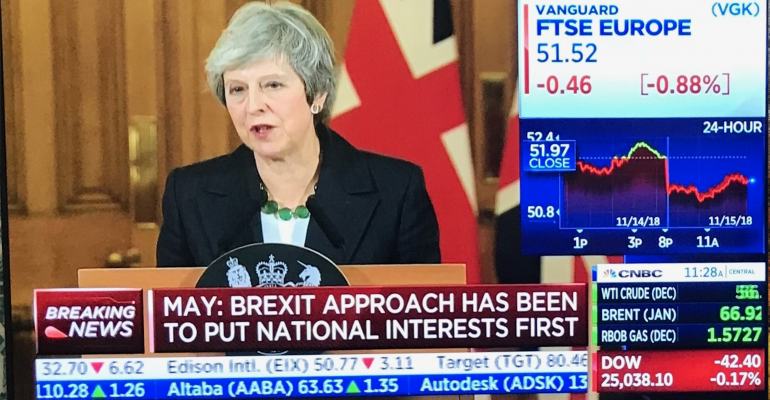 British P.M. Theresa May addresses media on November 15 after getting pushback from her own party on proposed Brexit deal.
Global Events Planning

This Week in Brexit Drama: It's Getting Real

With a divorce agreement between the EU and Britain no closer to completion after many months, should travel and event planners start worrying?

In recent days, U.K. Prime Minister Theresa May has faced strong pushback from her own party to elements of a proposed Brexit deal with the European Union that would, among other things, keep travelers and cargo moving smoothly across U.K. borders after it leaves the EU on March 29, 2019. With more than four months remaining before the scheduled Brexit date, U.K. and EU politicians and commissioners have time to construct an agreement. But given the events in the U.K. this past week, "the risk of very disorderly Brexit is increasing as we speak," John Wraith, head of U.K rates strategy at UBS, told CNN on November 15.

Prime Minister May announced on Wednesday, November 14, that her cabinet had agreed to the terms of a Brexit deal, but many Conservative Party members are vehemently opposed to those terms. So, Thursday ended with May holding a quickly scheduled news conference at her Downing Street residence to reiterate her determination to continue with the deal as constructed, even at the risk of her job through a party no-confidence vote.

Though still unlikely, a "no-deal" exit from the EU by the U.K. on March 29 could bring difficulties to the travel industry for some time. For instance, Politico reported that the European Commission told diplomats at a meeting in June that EU countries should prepare their airports and aviation sector for a no-deal Brexit that ends present aviation agreements. The result: Countries would have to hire customs officers and possibly expand terminals to deal with less-streamlined passenger traffic and cargo. The same would have to be done in the U.K. The commission said that countries should consider not just their customs handling capacity but also prepare for impacts on security, safety regulations, and passenger rights. During the diplomats' meeting, one official said that “it would not make sense for the commission and the national governments not to prepare for the worst-case scenario.” Also possible in such a scenario: The stoppage of flights between the U.K. and the EU until an agreement is made.

Another element that could affect meetings and events in the U.K. in the case of a no-deal Brexit in March is cost of goods and services. The British Pound lost two percent of its value on November 15 alone as news of the Brexit-related leadership turmoil came out. However, the International Monetary Fund said in a report published November 14 that no deal would "lead to widespread disruptions in production and services" and significant market consequences. With new trade barriers as well as supply-chain complications for food, medicine, and manufactured goods possible with a no-deal Brexit, prices could spike both in the U.K. and in EU nations.