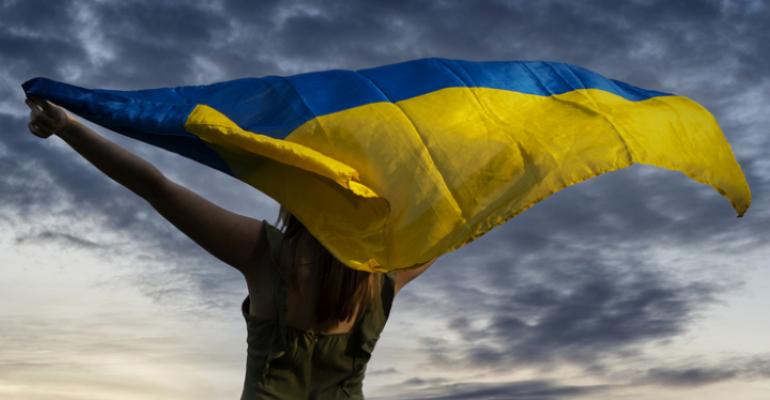 Here’s our growing list of meetings-related organizations and conferences that are suspending business with Russia, or otherwise working to make a difference as the war in Ukraine drags on.

In response to the invasion of Ukraine, many Western companies—from Goldman Sacks and McDonalds to Exxon Mobile and Netflix—are cutting ties with Russia by closing stores, ceasing trade, or otherwise pausing operations. Similarly, many organizations in the meeting and travel industry are working to isolate Russia from commercial activities.

Beyond expressions of outrage at Russian’s actions and solidarity with the Ukrainian people, here’s a wrap up of actions being taken in the meetings industry in response to the crisis.

Associations
New March 11: The International Congress and Convention Association announced that it has cancelled all planned activities and events in Russia. In addition, its 14 Russian members, which include the Russia Convention Bureau and ExpoCentre in Moscow, will not be able to attend ICCA events until further notice. ICCA plans a 10,000 euro contribution to humanitarian efforts.

March 9: Destinations International announced it will not do business in Russia “until a peaceful resolution takes place” and that it has terminated the membership of its one member in Russia, the Saint Petersburg Convention Bureau.

March 7: The Society of Independent Show Organizers said that it has suspended Russian members from participation in its events. It also launched a fundraising campaign to support humanitarian efforts.

March 3: The Society for Incentive Travel Excellence reported that its chapter in Poland is actively supporting refugees from Ukraine who have crossed the border into Poland, with transport, accommodation, food, medicines, cleaning products, medical, and legal assistance. In some cases, they are making their homes available for mothers with children.

March 1: Meetings Professionals International said it will suspend business with all companies in Russia. In addition, plans to formalize a chapter in Russia have been paused.

Conferences and Expos
March 8: The two Russian exhibiting companies at the National Association of Broadcasters upcoming NAB Show April 23-27 in Las Vegas have been “uninvited,” according to Inside Radio. “We will cease doing business with Russian-based companies as it relates to exhibiting at NAB Show,” an NAB representative told the news outlet.

March 4: Collision, a global tech conference planned for June 20-23 in Toronto, banned all Russian businesses, including public and private companies; government officials; and media with ties to the Russian government, from participating in the event.

February 28: The International Mathematical Union announced that the International Congress of Mathematicians, planned for July in St. Petersburg, Russia, would be changed to a virtual event because of Russia’s aggression.

February 25: GSMA, organizer of Mobile World Congress, banned some Russian companies from exhibiting at the February 28-March 1 show in Barcelona.

Hotels and Venues
Major hotel chains continue to operate their brands throughout Russia. No chain has stopped hotel operations because of the war, but most have pledged to stop new hotel development.

March 10: Marriott International announced it would pause the opening of upcoming hotels and all future hotel development and investment in Russia.

March 9: Hilton suspended new Russian hotel development and said it would donate profits from business operations in the country to humanitarian relief for Ukraine. It has also closed the corporate office in Moscow, noting that affected employees will have continued work and pay.

March 9: Hyatt Hotels Corp. announced it would suspend development activities and new investments in Russia. The company also said it is providing refugee accommodations across Europe, sending supplies to the people of Ukraine, and helping Hyatt employees with job transfers and a relief fund.

March 9: According to Bloomberg, Accor is keeping its 57 Russian hotels open but has halted services to those whose owners are under U.S. or European sanctions. It’s also stopping work on five hotels in development in Russia. Accor say that hotels in 12 European cities are hosting Ukrainian war refugees, including hotels in Lublin, Krakow, Nowy Sacz, Raclawice, and Warsaw, Poland; Bucharest, Timisoara, and Galati, Romania; Paris; Genova, Italy; Budapest, Hungary; and Chisinau, Moldova

February 27: Oak View Group, a large facility-management firm, pledged not to use any Russian brands in its venues. The company operates seven convention facilities and more than 20 sports arenas and stadiums around the country, including the new Climate Pledge Arena in Seattle and the new UBS Arena just outside New York City.