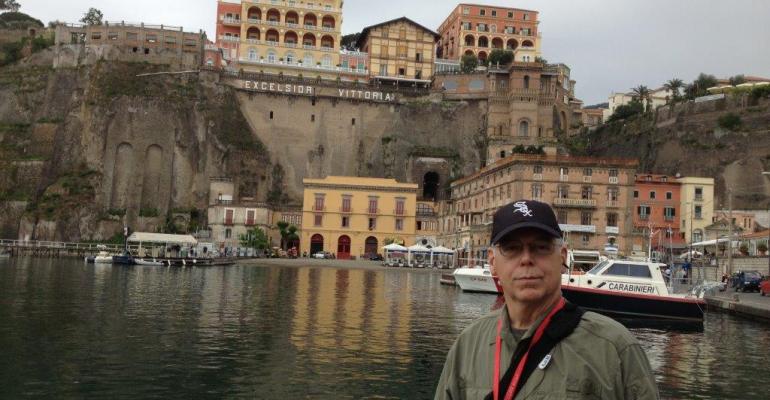 David Smart: Looking Back on Nearly 40 Years of Meeting Planning

MeetingsNet: What was your first experience with meetings?
David Smart: I started at Alfa Insurance on June 21, 1976, as the advertising and promotions manager, responsible for selling advertising in member publications and working with events, including the Annual Meeting, Southern Commodity Producers Trade Show, and other meeting projects. My role involved organizing hotel housing, with 1,100 rooms blocked for the two-night Annual Meeting and 2,400 attending; and more than 600 rooms for the three-night Southern Commodity program with 1,500 attending. A team of us planned the convention center space and organized script segments for general sessions, and for me this work just seemed to be a natural fit.

Internal meeting assignments were usually delegated to different staff each year, and valuable experience was lost in this transition. Staff were generally quite willing to release their meeting assignment responsibility to me, and I gradually took on more and more parts of our meeting management until one year the Birmingham Jefferson Civic Center opera- tions manager, Burt Bresowsky, approached me with the idea of creating a full-time meeting management position at Alfa. Burt was from New York and he wanted to get things done and done right. He was frustrated with dealing with too many chiefs wanting to change things on site when our meeting came to BJCC.

So I began to think about selling management on creating an in- house Meeting Division. The case was made when I was on a planning trip to the Birmingham Hyatt in 1979 and found four other Alfa employees at the same hotel! We were planning meetings with no central management, no consolidation of buying power, and no consistency. Eighteen months later, I was named corporate meeting planner, and in 1984 our in-house travel agency, Destinations, was launched under the in-house advertising agency, Creative Consultants Inc. In 1986 Destinations became a separate department.

MeetingsNet: What was most enjoyable to you about meeting management? What was most challenging?
DS: Meeting management provided the reward of working on projects from concept to completion. Every event requires a combination of teamwork, with involvement from many different areas, and individual ownership and responsibility. Working with in-house clients, outside suppliers, and event attendees required exacting communication and delivery of expectations. Every day was exciting, with projects to develop and personalities to navigate.

The most challenging part was keeping the team moving while navigating through departmental turf. Planners operate on decisions made and we take immediate action, so we must ensure that our contacts on all sides understand that making changes to agreements that are already in place can quickly become matters of legal importance.

MeetingsNet: What are some of the biggest differences between meeting planning then and now?
DS: Technology was non-existent in the 1970s. We used IBM Selectric typewriters as our tech platform, and used templates to design space layouts with paper and pen. (I was strolling through a local antique shop recently and a small boy was pointing to a typewriter and asking, ‘What is that, Mom?’ Yes, that makes me feel really old.)

Fax machines existed in the most primitive form, and every printed message would eventually fade away to an unreadable blur unless you made a Xerox. (Every copy machine was referred to as ‘the Xerox’ regard- less of the actual manufacturer.) When computers arrived on the meeting scene, Lotus Notes was the primary program and, thankfully, things con- tinued to evolve.

Cell phones as we know them did not exist. My first unit came in a shoulder bag as big as a briefcase. We did not own cell phones: You checked one out to use for an event if you could get your hands on one. Walkie-talkies were actually much more productive on site at events, but our frequencies seldom matched with our partners’ frequencies, so we ended up carrying three walkie-talkies to communicate with staff, hotel, and convention center personnel. You looked like a Deputy Sheriff with all this hardware on your belt and didn’t know which unit to answer when they started sounding off.

Also, in those early years we were running a planning department with a mailroom operation rolled into the mix, with thousands of mailings per month. Event Web sites and online meeting management eventually replaced the mountains of printed material we once mailed: registra- tion, agendas, travel information, paper tickets, change updates, reminder notices, and more.

Resort and hotel properties began evolving in the late 1980s, and there has been no stopping them. It is exciting to see how the entire business of travel, meetings, and incentives has evolved. Now that I am retired and looking at all the amazing developments coming in this industry, it’s a bit like arriving at the revolution with all the weapons I need to fight the battle, only to find I have just run out of ammunition.

MeetingsNet: What about working with suppliers then and now?
DS: Up to the time of airline deregulation, from 1978 to 1984, we knew our air carrier marketing reps, and an airline seat was not just a commodity. Competition was based on food, cabin crew, schedules, and favors for frequent travelers. (Frequent-flyer programs were not yet on the scene.) The government regulated routes, pricing, and the type of aircraft serving various markets. This system was economically inefficient but the passenger was king during that time, or at least it seemed that way.

Imagine point-to-point service, which made no economic sense, out of second-tier markets with large aircraft flying at half capacity. Airlines had marketing offices in second- and third-tier cities chasing all types of business, but by 1984, they were closing offices and changing the business model to feed hub airports with smaller aircraft, and merging to survive. This changed group business as regional turboprop aircraft took over smaller markets and the DC-9 and 737 moved out of small cities to more profitable routes.

Deregulation was good for the airlines and competition lowered fares for travelers, but group travel planning got a bit more interesting.

MeetingsNet: Can you share some thoughts about memorable meeting destinations?
DS: Every destination is memorable for special reasons. It might be the emotional experience of Rome or the romance of Paris, Ireland’s charm or the art and flower fields of Holland, Alaska’s natural beauty or Canada from east to west. London, Mexico, San Francisco, New York, Scottsdale, Tucson, Hawaii, Hollywood, and cruising the oceans have all been special. The memories of all these destinations bring to mind the comments of excited attendees experiencing things they would not likely do on their own, with all these emotions tied to the company that provided them.

Paris and Rome were most likely the biggest hit with attendees. Both cities are on everyone’s bucket list.

MeetingsNet: What destinations were most unlike what you expected?
DS: Hollywood and Los Angeles turned out to be the best surprise for our agent incentive travelers. During the contest period, we could sense a lack of excitement from some agents, who viewed Los Angeles as just a big, dirty city. But the trip was a smashing success with an Eagles concert at The Hollywood Bowl, a buyout of the House of Blues on Sunset Boulevard with the World Class Rockers, private studio tours, and a final gala evening with Lionel Richie. Contest results were on target and winners rated this trip in the top two of their careers.

Tucson, Ariz., also delivered a grand surprise for our attendees. The announcement of the destination was met with, ‘What’s in Tucson?’ and ended with ‘Wow, Tucson!’ It was fantastic fun to hear our travelers telling their trip stories to those back home.

MeetingsNet: Any advice for newer planners?
DS: Planners need to constantly learn how to sell ideas. This includes selling the value of what we provide for our company. Read about and study selling techniques and become a salesperson. Some clients may have a vision
of where they would like to go with no understanding of how to deliver the incentive or meeting product. A great destination for a personal trip may not be the destination for an incentive or meeting event. Be sure you understand how to properly plan product delivery as well as fully evaluate unintended consequences. Also, know that you and your team should be managing personalities and not just managing people. Study personality types and how best to deal with the personalities of the client.

MeetingsNet: You’re now several months into your retirement. Are you enjoying it?
DS: My retirement resulted in the immediate relief of work stress. In our work lives, we operate on sets of never-ending deadlines and project performance. This is not the sort of job where you leave it behind at the office. When you wake up in the middle of the night with meetings on your mind, you finally know what you are doing.

So far, having time is the biggest benefit. I do miss the meeting and travel business as well as the people I have met and the friendships I formed over these past years. My wife of 42 years, Anna, will be surprised to see me more than half the year (and might actually be more surprised than she would like to be). Already I’ve had more time to see our youngest son, Hunter, an Iraq War veteran, and his wife, Joni, living in Tallassee, Ala. Next year we plan to visit our oldest son, Dave, and his wife, Jennifer, and our granddaughter, Eva, in Sydney, Australia, where they have resided since 1999. Looking back, I don’t think the Lord could have put me in a better place at a better time.