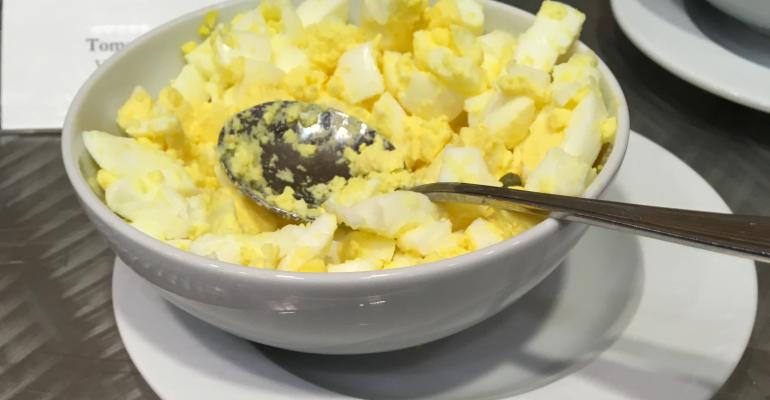 Sometimes a picture is worth 1,000 words—especially when it's of eggs at a breakfast buffet.

I almost choked when a colleague sent along this photo from a breakfast buffet at a recent event: So strange to see a sign simultaneously so obviously right and so obviously wrong, at least for the non-lacto-ovo vegetarians whose feathers I am sure were ruffled by this one. Or maybe the kitchen staff whipped them up using the fruit of a rare and wonderous chicken plant? Scratching head.

Want a second helping of silly food signs? Here's some restaurant sign fails from Readers Digest. Having made plenty of errata myself, I can't help but eat these up (groan—apologies).

Speaking of odd things to do with F&B, I also recently received a press release for ClearVia, a priobiotic blend that is designed to help metabolize alcohol while you sleep. For weddings or other social events, sure, why not? But the PR person was pitching it as "a fun corporate event party favor." I've been around long enough to think I had seen it all, but this was a new one to me!

Update: Maybe it's because I spend so much time in the pharma/medical meetings space where optics are everything, but now that the emphasis is being put much more on keeping meetings business- and results-oriented, planners tacitly saying, "Go on, party hearty and take this probiotic for your hangover" just seems like an unusual message to be sending to participants. But the PR person said in a followup email that the company has gotten a lot of interest from planners who want to purchase it in bulk for their meetings, so maybe there are more groups bucking the down-to-business/focus-on-ROI trend than I'd thought?